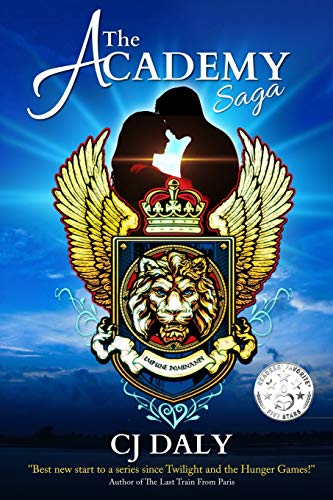 about this book: There's a secret government organization in Marin County, California posing as an elite military academy. "The Academy" routinely sends cadets out to scout prospective civilians for their gifted program. When Elite Cadet Peter Davenport gets his first mission, he thinks it's going to be a cake walk . . . until he meets his mark.

Seventeen-year-old Katie Connelly is living out on the scrabbly plains of "Nowhere New Mexico," just barely surviving. Her mother has recently died, and her father has basically checked out, leaving her to fend for herself and her brothers by waitressing at a truck stop diner. When two handsome strangers crash into her booth one boring afternoon, she gets a funny feeling up her spine. And a hard time from them. Why would two guys who obviously have so much, and are on their way out of town, pay any attention to her?

She soon finds the answer to that burning question, because those mysterious guys just happen to be ambassadors for the new elite academy that is after her "gifted" little brother. . . . Coincidence? Her mother said there's no such thing, and to always trust her instinct.

But that might be kind of hard, since Kate has accidentally caught feelings for Cadet Davenport. And she must fight against his mission, and her own heart, to save her family from the clutches of his ruthless academy.

• Readers' Favorites Review
"With unusual subtlety and skill, CJ Daly crafts a novel filled with originality and sophisticated, true-to-life characters. The Academy will have strong appeal for both young and adult readers and anyone looking for an exciting, contemporary romance." ⭐️⭐️⭐️⭐️⭐️

• Book Viral Review Young Adult paranormal romance
"A superb read that will surely appeal to fans of The Hunger Games and Twilight, The Academy is recommended without reservation." ⭐️⭐️⭐️⭐️⭐️

Video: The Academy by CJ Daly