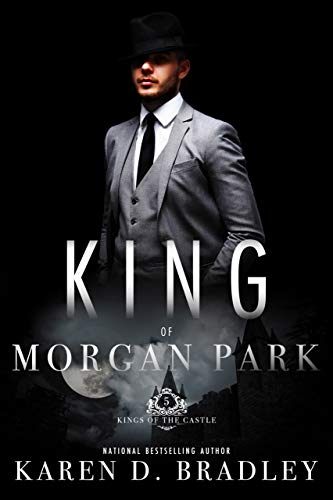 about this book: Daron Kincaid is supposed to remain under the radar while the dust settles in his life. Unfortunately, creating a tracking device that helped locate victims of trafficking, and becoming a board member of The Castle, put him under a spotlight. Coming out of the shadows could have dangerous consequences that affect everyone around Daron including dismantling his relationship with his woman, Cameron.

In order to manipulate Daron in his position in The Castle, an enemy targets Cameron in hopes of leveraging her life against a project worth billions. The attempts threatened to unleash Cameron's lethal side. If that wasn't enough, one of Daron's mentee's witnesses an event that could lead to the young man's death, before he has a chance to change his path for the better.

Can Daron juggle everything that's going on in his life? Dropping the ball in any area could mean someone he cares about ending up on the other side of the grave.
King of Morgan Park is Book 5 in the Kings of the Castle Series.
Each King book is a standalone and can be read in any order with NO cliffhangers.

• What inspired you to write this book?
This story was a request from my editor. She felt that my character, Daron from Transition of Power, would be a good fit for her Kings of the Castle series. I was hesitant because I was debating whether Transition of Power's character, Cameron, would become part of a series. However, the next Cameron Stone story was set to start two years after Transition of Power. King of Morgan Park happens within those two years. The invite to be a part of the series threw me for a loop. However, I decided to use the unplanned prospect as motivation to write about my character, Daron, in King of Morgan Park. Many times, our best-laid plans are derailed by an unexpected opportunity.

• What was the hardest part of writing your book?
Writing this book was challenging in many ways. It needed to be a standalone where readers didn't need to read Kings of the Castle, which is the introduction to the series, or Transition of Power, which was where the characters originated from. I had to honor the timeline I established in the Transition of Power while intertwining the new data from the series. I also had to tread lightly to not throw off essential elements, if I decided to pursue the Cameron Stone series. The hardest part wasn't being in full control of the story. I've always written the stories that were like lava erupting from a volcano, the ones whose flow couldn't be stopped and burned away all the other ideas. For King of Morgan Park, I had to do somethings I normally don't do, for example forcing myself to write a story that wasn't like a wildfire burning in my mind. Writing it felt like pulling an eighteen-wheeler through sludge. It truly challenged me as a writer. I was so grateful when one of my beta readers said, "You have stepped up to the plate as usual and have taken me on yet another great adventure." I hope the other readers agree and enjoy the story as well.

• Did you learn anything from writing your book and what was it?
While researching information for the book, I was reminded of the alarming rate people are going missing. Through the homeland security website, I was educated on the different types of trafficking and the myths surrounding it. Reading articles about women who were missing was heartbreaking. While King of Morgan Park's story had a direction change and didn't dive into exploring the elements of trafficking. I hope it sparks enough interest with the readers to do their own research to be able to recognize the indicators, know how to handle certain situations, and where to call if they suspect a person is a victim of some form of trafficking.