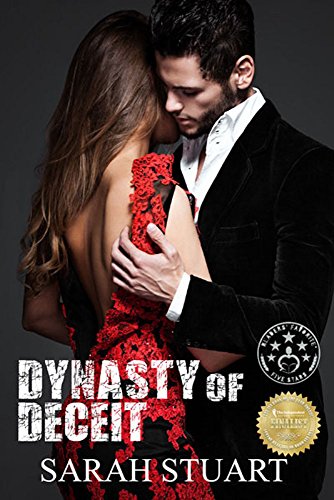 about this book: Showbiz superstar, Michael Marsh, is spotted on a skiing holiday in the Swiss Alps. He signing autographs when his wife, Elspeth, is stabbed only yards from him. Dozens of potential witnesses fail to see the murderer.

Distraught, Michael sends for his eldest daughter, Lisette, rekindling media speculation about an incestuous lovechild. Brian, Lisette's husband, jealous and driven by his own guilty secrets, vanishes in search of the killer, whist a hostile DCI sets out to prove Michael and Lisette hired a hit man.

Who killed a loved wife and mother, and why? Can Lisette honour her promise to Elspeth to pass on Margaret Tudor's Book of Hours to a daughter conceived in love, or must lovechild Harriet risk having a baby with Kit, the lover who is also her twin.

Readers' Favorite Review: "Dynasty of Deceit has everything readers would look for in a romance and murder novel — passionate sex, intrigue, secrets, stabbings-in-the-back, and lies. Sarah Stuart's writing is as sensual and tantalizing as the love scenes she describes, punctuated with beautiful and plot-driven dialogues. But the characters are what will keep readers captivated, and the duplicity and cunning of some of them will make readers think that nothing is ever as it seems."

Other books by Sarah Stuart