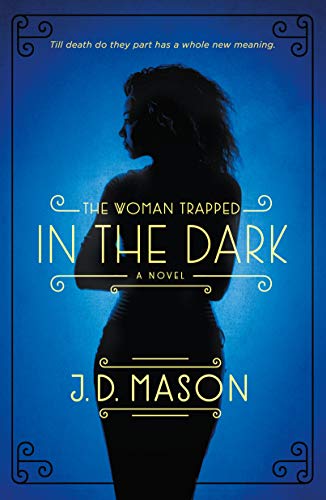 Book: The Woman Trapped in the Dark - A Novel (Blink, Texas Trilogy Book 3) by J.D. Mason

about this book: Jordan Gatewood never expected to fall in love. He certainly didn't deserve for a woman like Abby Rhodes to love him back, but he's grateful for her and careful with her because he absolutely does not want to make the mistakes with this relationship that he's made in the past. Rich and powerful men like Jordan have had to play this corporate game since taking over the helm of Gatewood Industries after his father was killed when Jordan was a junior in college. He's made more than his share of enemies, enemies who've held grudges for too long, and when they discover that he has a weakness, and that that weakness is Abby, they take advantage of it. Abby is kidnapped and unless Jordan concedes to their demands, he'll never see her again. He's got five days to find her, and she's got five days to try and escape.

They say that when an author falls in love with a character, that character will never die. So, I fell in love with Jordan, but not right away. He was supposed to die three books ago. I introduced him in a book called Beautiful, Dirty, Rich and went out of my way to create this terrible character that everyone hated. I did a great job too, because everybody did. But then, in the book following BDR, called Drop Dead, Gorgeous, something started to change in me and with Jordan. By the time I finished the last book in that series (Crazy, Sexy, Revenge), as I came to the end of that book, I had every intention of following with through with my plan to kill him off. Didn't happen.

As a character, he's been through so much, and has had such a transformation that I was compelled to write this magical love story for a man who had come full circle and found a kind of unexpected redemption. Abby Rhodes is not the kind of woman anyone would think a man like him would fall for. She's a general contractor, a country girl, who is not impressed by the trappings of wealth, but is highly impressed by him.

The Woman Trapped in the Dark is the culmination of everything he's gone through. He is an extremely passionate man, and for her, even moreso. I wanted to write a story that was as passionate as he is, and to show just how far he was willing to go to keep something that had eluded him his whole life. And I wanted to show the strength of this woman he loves. Abby's a force to be reckoned with no intention of being that damsel in distress.