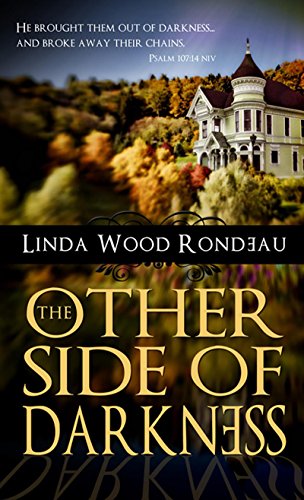 Book: The Other Side of Darkness by Linda Wood Rondeau

about this book: As a prosecutor, Samantha Knowles possessed a passion for justice. Described as hard-as-nails, few people know that Sam sleeps with her light on. After spending three years of non-stop work to put away a child killer, her boss insists she take a much-needed vacation. She heads for the Green Mountains in Vermont for a ski getaway.

However, during a heavy, early spring rain, Sam becomes disoriented and makes a wrong turn, ending up in Adirondack wilderness. Following a head-on collision with a bull moose, Sam becomes stranded in the strange but friendly town of Haven.

She is romantically pursued by Jack Bordeaux, an EMT by night and teacher by day. Although attracted to Zack, all Sam wants to do is get back to Manhattan, especially when she learns that her hard-fought case against Harlan Stiles is falling apart. Then there's the mysterious, yet somewhat obnoxious artist, Jonathan Gladstone whose mountain-top estate, Dawn's Hope, calls to Sam.

Harlan Stiles borders on insanity while confined in prison. His attorney suggests he might be able to reduce his sentence by filing a lawsuit against the D. A's office for prejudicial prosecution. Though acquitted in juvenile court, there is evidence that Knowles' was implicated in the death of her abusive father. The lawsuit will take time of course—and Stiles is tired of waiting. Knowles' unrelenting persecution has cost him everything, including the love of his life, the girl's mother. Why won't Knowles believe the child's death was a horrible accident? No longer able to endure confinement, Harlan manages escapes and learns Knowles is now in a place called Haven. He becomes obsessed with revenge.

Zack Bordeaux feels as trapped in Haven as the squirrely, yet attractive guest, Samantha Knowles. Since the night he rescued her from a horrible car accident, Zack has felt drawn to her both romantically and with a sense she needs protection. Though fiercely independent, would she be the one to anchor him in a town he is anxious to leave?

Since his wife and son's tragic deaths, successful artist Jonathan Gladstone has been a man in deep conflict. Mostly disinherited, he is little more than a tenet in his own estate. He decides to contest his father's will and engages the help of the Moose Killer attorney who has taken up temporary residence in Haven. He does not plan on his attraction to her. Besides, she has no desire to stay in Haven.

Critics say this romantic suspense, a 2012 Selah Award for debut novel, is a literary treasure full of imagery and symbolism … yet keeps the reader engaged from page one to its surprising end.

Though now residing in Maryland, Rondeau was a long-time resident of the Adirondack area. Her years as a social worker has provided her with insight into psychiatric and psycho-social issues. The Adirondack area is a perfect backdrop for intrigue and romance. The fictional town of Haven is based on the historical town of Whitehall, the birthplace of the US Navy. History buffs will enjoy the references to Revolutionary War engagement in this region.

Other books by Linda Wood Rondeau