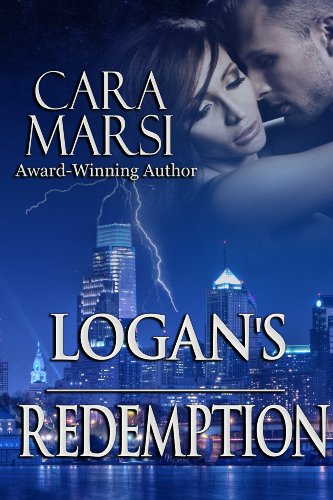 about this book: Logan's Redemption is the first book in The Redemption Series trilogy. Set in Philadelphia, the series follows three couples united by desire and danger. In Logan's Redemption, we meet Doriana Callahan and Logan Tanner. They fell in love as teenagers, but a horrific incident forced Logan to flee the city. Heartbroken, Doriana never had a chance to tell Logan she was pregnant with his child.

Sixteen years later, he's back in Philadelphia, working undercover to help Doriana's father find the culprit who is sabotaging his international construction company.

The flames of love and desire still burn between Logan and Doriana. But years of heartbreak and secrets threaten to destroy their tenuous relationship. When Logan learns he and Doriana have a son, his emotional pain is deep. As the suspense escalates and someone stalks Doriana, Logan fights to forge a bond with his son and races against time to save the life of the woman he's always loved.

Can Doriana and Logan overcome old hurts and new dangers to find a second chance at love?

Authors Note: In Logan's Redemption, Doriana still thinks of Logan as the poor guy from the tough neighborhood she fell in love with. He's so much more than that. Because he's working undercover, he can't reveal his true self to her, which creates conflict between them. I got the idea for the basic premise of "he's not who she thinks he is" from an old Claudette Colbert/Fred MacMurray movie I saw years ago.

Because I worked fulltime when I began writing Logan's Redemption, it took me about two years to write and polish it. The original title was A Temporary Affair. An editor at one of the publishing houses who offered a contract asked me to change the title. I did, but I turned down that house's contract. I eventually sold it to The Wild Rose Press, where it was released in 2007.

The cover from The Wild Rose Press showed a beautiful woman with a dark, spooky background. I published the book myself in 2010 when I got my rights back. That second cover, with a hot guy, got lots of attention. When I published Book 2, Franco's Fortune, in 2013, I needed covers that were similar to show the books were in a series. Hence, the current cover. Book 3, Luke's Temptation, was published in 2014.

I hadn't planned this to be a series, but readers wanted more from the Callahan/Tanner/Santisi families. I was happy to oblige. I love the families and I hope my readers do too.

I also hope my readers love the suspense, the romance, and the second chance at love that is at the heart of Logan's Redemption.

Some praise for Logan's Redemption:

• "Logan's Redemption has all the elements that keep the pages turning: passion, romance, thrills and suspense…" — Fallen Angel Reviews

• "Logan's Redemption by Cara Marsi is a great read, plain and simple" — My Romance Story Reviews

• "Logan's Redemption is riveting. Ms. Marsi is an excellent author and I'll definitely look for more of her books. I highly recommend this one!" — Romance Junkies