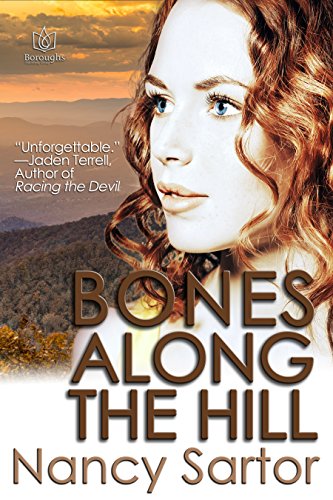 Book: Bones Along The Hill by Nancy Sartor

about this book: Several years ago I woke to a whisper in my ear. The whisper said, "Hi. My name is Neva and I fix the faces of the dead." Thus began BONES ALONG THE HILL. I had a protagonist. Now all I needed was a setting, more characters and a plot and to learn enough about the funeral industry to write a novel. No problem.

Since I am a Nashville native (not many people are any more), I set the story in the Music City in her father's funeral home. Neva's teenage years were nearly destroyed by the suicide of her fiance. The story opens ten years later when she is nearly recovered from that tragic suicide and has met a wonderful man, architect Davis Pratt, who offers a romantic future Neva yearns to accept. But she can't quite let go of Gray Ledbetter, her dead fiance because she does not know why the seemingly happy sixteen-year-old killed himself. Gray took that knowledge to his grave and so she will never know.

Davis Pratt has his own tragic mystery. He searches for his younger brother, Stephen, who disappeared long ago. Chances are Stephen's dead, but Davis won't give up the search. When their separate searches lead them to the Oakley cemetery and a murder tied to a human trafficking ring, impossible crimes threaten both family and friends, crimes that cannot be ignored. Not even the Nashville PD can keep Neva safe. Can they solve their mysteries together as they could not separately and free one another to embrace their future?

My editor (a *wonderful* woman) couldn't read BONES at night because it was that suspenseful. One of my readers said she spent a good bit of her reading time on the edge of her chair chewing her fingernails.

Video: Bones Along The Hill, a romantic suspense novel by Nancy Sartor