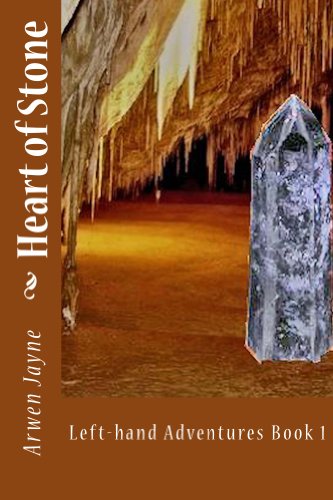 about this book: Heart of Stone is a romantic paranormal fantasy set in Australia. The Malakim, the good guys, have been battling the Din, the bad guys for thousands of years. A 100,000 years ago Commander Alexios Thex was captured by the Din, along with the survivors of his team. Using state of the art dark light weaponology the Din imprisoned the captured survivors in Sama crystal, the hardest known element in all the dimensions. Cast out on a lonely backwater of a planet on the outer arm of the spiral galaxy they defend they must endure until humans with enough compassion evolve to free them.

The Malakim's three spiritual paths, as outlined in the books are my own invention with the left being antinomian (Aris), the right for justice and defense of the weak (Thex), and the middle as the way of compassion (Filia). The paths themselves are inspired by the branches on the Kabbalah Tree of Life. Above the Malakim are planetary and galaxy guardians/oversouls such as Simon's mother Ma. Beings like Meta, Thex's father, are beyond all relative distinctions, beyond all limits, but able to simultaneously act as individuals and as part of the whole, the all-spirit.

Most Malakim only know Alexios by his nickname Thex, given his role as a galactic defender.

Tyra, a quiet natured, scholarly librarian is the compassionate one. She's been haunted by strange dreams all her life. Now she finds herself heir to a destiny the rest of her family has hidden from her until now.

The Din have at various times been called Djinn and Jinn in other mythologies. In the Gnostic mythologies they were the evil, hideous lion-headed serpents that represented the fallen angels or archons that rule the material world solely for their own benefit. They see humans as their worker slaves. Since in these books they are reptilian I have surmised that they would be in favor of global climate change that would alter the world's climate to their benefit. In this story they are the souls of dinosaurs who wanted to sidestep the normal path of evolution and instead exist as immortal etheric spirits, inhabiting human hosts who have mindsets that suit their purposes. As their human hosts age and die they spend a short time in The Between and then move on to another host. The Between is a kind of purgatory for souls unwilling to follow their normal evolutionary path that would involve reincarnation in one of the many dimensions of existence.

Higher dimensional beings, Malakim and above, are able to read all history and events in space-time from the Ether-Net, my take on the akashic. It is a vast repository of knowledge of all that is, has been and potentially could be.

Since immortals don't really exist in this dimension as anything more than high frequency sound and light they must project a physical reality that humans can relate to and that allows them to act in our world. This is what Simon in this first book calls a mental construct. It allows them to felt as solid matter but they can't be harmed by anything except the Din's dark light weapons technology. As meta beings like Meta are beyond all relative existence they can't be harmed by anything.

The Malakim are able to travel about freely be dissolving their mental construct, travelling through the non-local which is beyond the relative realm of time-space and location then reconstructing themselves. They can use a similar process to shapeshift. This is covered further in the next book of the series.

Simon's main mission on the planet is to protect Thex's imprisoned team and work towards their release by finding humans with enough compassion they might be capable of doing what's necessary to free them. He also works with other immortals and humans from guardian families to thwart the Din, hampering their total takeover of the world.

Before this novella I'd only written short stories. It was one hell of a big learning curve learning to write erotica, research weapons and fighting techniques and refining my knowledge of the Gnostic mythology and spiritual ideas I wanted to embed into the story. I conscripted friends to help with editing and reading the draft, cutting out boring bits. After that I bought some graphics software and conned my partner in doing the cover for me. Then it was learning about how to put it all on Amazon using CreateSpace and Kindle Publishing. All that now seems to pale into the easy compared with Marketing.