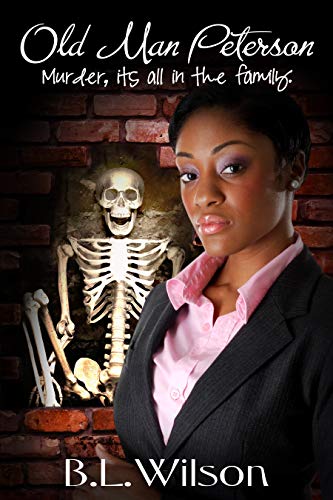 Book: Old Man Peterson - murder it's all in the family (Cops In Love Book 1) by B.L. Wilson

about this book: I'd like to introduce you to my romantic murder mystery, Old Man Peterson, murder it's all in the family. It is the first volume in my "Cops In Love series." I'm fascinated with the idea that men such as Ted Bundy, John List, and Wayne Williams who commit murder but can live among us normal folks and go undetected. They look and act as we do. In fact, they could be us.

I explore that possibility through a murder mystery with a romantic bent. My novel opens with the discovery of a skeleton embedded in the wall of an apartment in Upper Manhattan. The secrets in an old woman's journals, her rapist's contradictory sixty-year-old memories and her recent statements during a murder investigation tell several versions of the same incident. The opposing viewpoints of the old woman and her rapist provide a glimpse into the 1940's and 1950's world of cash poor but land rich southern Blacks and their northern wealthier counterparts.

The third story line chronicles the battle of wits between Nita's granduncle, Hiram Kennedy and Lieutenant Truman, for Nita's affections. The battle gets underway when the murder investigation exonerates the paternal grandmother as the prime suspect and the lieutenant finds the uncle as a more likely suspect.

The fourth story line describes obstacles a gay woman of color encounters working in a straight, mostly white, male-oriented police culture. With her passive-aggressive personality and her tenuous status as a new lieutenant, Abigail Truman is the perfect foil for her uptight captain and the prime suspect, Hiram Kennedy's crafty maneuverings.

I wrote Old Man Peterson, murder is all in the family because I felt the reading public might enjoy mystery novels with mature, African-American lesbians in them.