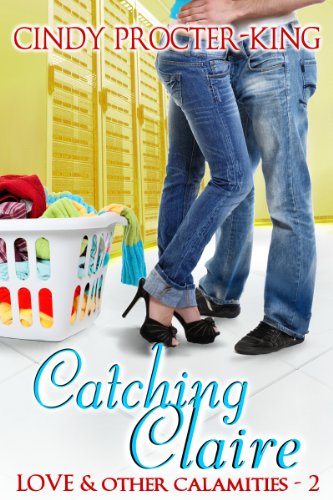 about this book: Catching Claire is the second story in my romantic comedy short story series, Love & Other Calamities. Catching Claire picks up a few hours after the first story in the series, Deceiving Derek, ends.

If you've read about Deceiving Derek on Ask David, then you know that I originally wrote that story as a stand-alone. When I decided in 2012 to turn the story into a series, I mined Deceiving Derek for heroines and heroes for the rest of the stories in the series. In Deceiving Derek, Claire Merriweather, the heroine of Catching Claire, is basically stuck in the kitchen during a bachelorette party, mixing drinks. Meanwhile, a male stripper named Ridge is entertaining the ladies in the living room.

While I brainstormed Love & Other Calamaties, I wondered if I could possibly turn a male stripper into a hero of his own story. Why was he a male stripper? Why is he named Ridge? Is that his real name? Or a stage name? Who hired him to strip at the party, anyway?

As it turns out, Claire Merriweather hired him. And she has a huge crush on him...which leads to some embarrassing moments when she encounters him in the apartment building laundry room hours after the party ends and then wakes up in his apartment the next morning!

They are an odd couple, but they quickly discover that they just might be perfect for each other. An weiner dog with an underwear fetish and a ball python also make an appearance.