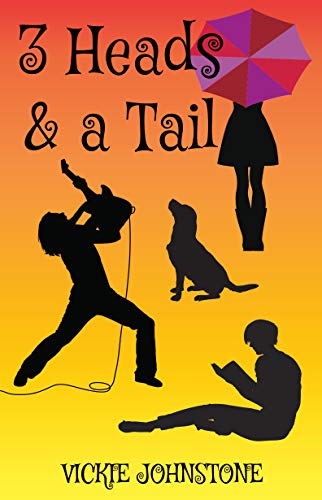 about this book: 3 Heads & a Tail is a quirky comedy about two guys, a girl and a streetwise dog who swears too much. I'm not sure of its genre. I'd say fantasy plus comedy plus a little romance and the pooch perspective.

The book came about because I crazily agreed to do the NaNoWriMo writing competition in 2011, where you write a book in the month of November. I finished on time. All I started with was the idea of a guy living in a house with his dog and another friend, and then a girl would move in. So the story was a seat-of-the-pants job as I had no idea what I would be writing next. I only had the final scene in my head and I wrote it pretty early on.

My favourite character is Glen, who is a Labrador Retriever. They are my favourite dogs. The name comes from my first pet when I was young – a black and white collie.

I played with the structure of the book, so it is a mix of past and present tense, and first and third person. That's to give Glen a true voice in the book – he gets his own chapters, because he's the hero after all.

This isn't a children's book as sex is discussed and there is one funny scene of a sexual nature.

So here's the blurb for the book...

When nature lover Josie moves into a house share with two pals, dreamer Ben and model man David, she sees it as a short stop and doesn't bank on an attraction developing with one of them. Meanwhile, Ben's dog, Glen, has the hots for Miss Posh, the beautiful golden Labrador in the park. When dog meets dog it's puppy love, but a complication leads to Glen taking matters into his own paws, leading to a situation that puts him in danger. In this comedy of errors, romance and walkies, it's anyone's guess who is going to win the girl/dog and live happily ever after.

Some review snippets from Amazon...

• "A humorous love story of a different kind, mostly seen through the eyes of Glen, the tail owner, and written with unusual wittiness and ability." — Annarita Guarnieri

• "Oh my gosh this is a funny book. I hate to harp on the topic of how the dog made the story, but I think he did." — Ey Wade

• "Glen has now replaced Buck as my favorite doggie character in a novel. Ms. Johnstone's characters are all wonderfully developed and she does an amazing job giving doggie voice to Glen and Mimi." — PDX Author