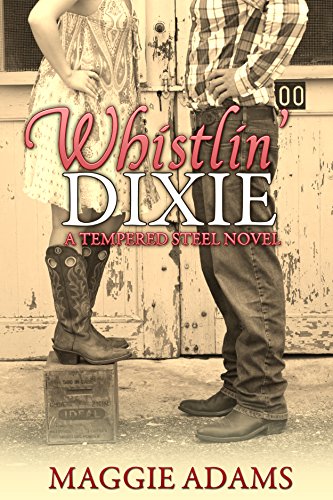 about this book: The series, Tempered Steel, revolves around the efforts of one family to rebuild their community after a devastating flood. I know just how horrific a flood can be to a small town like Grafton, Illinois. My friends and family lived through the Mississippi River Flood of 1993 in Grafton. I saw the pictures on the news and heard the stories from other family members, but unless you are actually there, you just can't fathom that type of destruction. It gave me the idea for this series, and Whistlin' Dixie is the first book. So what better setting than a town than had actually endured it and rebuilt to become bigger and better.

A few years ago, the tiny village of Grafton, Illinois, nestled along the banks of the mighty Mississippi River, was completely destroyed by flood. Mac Coalson sets about the arduous task of saving what could be saved.

When vandals strike the new construction, it was up to Mac and his brothers to catch the culprit before anyone is hurt. While laying a trap, Mac thought he had captured the criminal, but instead, he finds sassy spitfire, Dixie Harris, has stolen his heart.