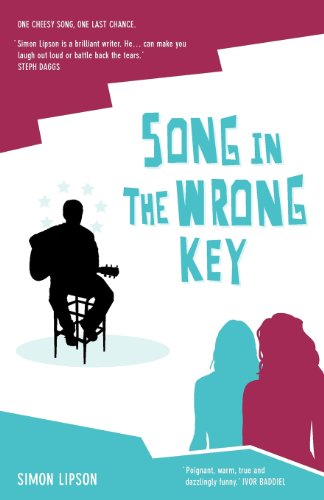 Book: Song in the Wrong Key by Simon Lipson

about this book: Song In The Wrong Key is about a man whose life implodes when he loses his job. One moment he is coasting towards retirement, the next, his marriage is crumbling, his role as the father of two little girls is in jeopardy, his friendships are under pressure and his job prospects virtually nil. As he falls into the abyss, it is only his rediscovered love for music that offers him any hope of redemption. But first he must overcome his distaste for a tacky European song competition which doesn't square with his artistic integrity. 'Lipson is a brilliant writer. He can make you laugh out loud or battle back the tears.' 'As good as anything by Nick Hornby.'

Having been a wannabe pop star who gave it all up to become a boring lawyer, only to make a dramatic career change in my thirties and become a stand up comedian and comedy writer, the protagonist of Song In The Wrong Key and I share several defining characteristics. I am drawn to people who follow their dream, however serendipitously. Luckily, my career choices did not affect my family life, but I can imagine the emotional upheavals of the disintegration of a family unit.

The book is a work of contemporary commercial fiction with the emphasis on humour. It has been described by some readers as 'women's fiction' and 'sophisticated chicklit'. My readership is broadly aged 20 - 60, predominantly women but, with a strong male protagonist, male readers are by no means excluded.

'Song In The Wrong Key' expresses the notion that a life can be lived off key, out of synch. In this case, the protagonist knows things aren't perfect but is too set in his ways to do anything about it...until circumstances force him to make changes.

The cover demonstrates the musical theme, but also a conflicted protagonist. For whom is he playing his song?

As a comedian and script writer, I find dialogue and humorous riffs easy to write. The difficult elements of writing are structure and pacing and, for me, I need to distance myself from my manuscript for a while before dealing with these.

My book is intended to make my readers laugh, first and foremost, but I have endeavoured to create real, rounded characters and believable relationships and storylines. Comedy has to arise naturally, rather than simply be a series of quips and riffs with no anchor. Comedy books that fail to engage the reader intellectually and emotionally are merely stand up in written form and I hope my readers will be touched by elements of the story as well as tickled!