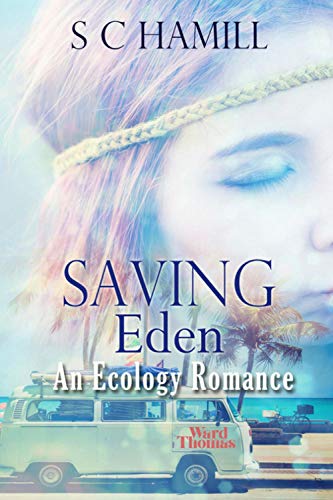 about this book: I was watching a news report about super-bugs becoming immune to antibiotics. I was also researching Harlan county in Kentucky for writing a book about it. I decided to integrate to two, and that's where the book inspiration came from. Saving Eden took about twelve months to write with a few months of research as well.I could also see that nobody has written an ecology romance either. Eden Buckley is a home girl and a very broad speaking individual and a music teacher. James Ustinov is a very British ecologist who is working at a swamp nearby her. They are both fighting for their own separate goals and their paths cross in the process.The book is specifically a romantic comedy about second chance love. The main story is interwoven with the romance and is based on something called the sixth wave of Holocene extinction. Which, although people don't know it, everyone on earth is going through, and experiencing at this time (2015) I designed the cover myself. It is meant to depict frogs that are a bio-indicator to us and also a beautiful red rose. Which relates to Eden Buckley and also the fact that one day, we may possibly lose a lot of our plants, wildlife and animals because of our own stupidity in looking after our planet.I researched a lot about Kentucky and a lot about ecology to be able to put pen to paper. The book is a light-hearted read with both comedy and serious parts. It is quite thought-provoking because the reports about global warming and deforestation and extinction of plant, animal and life are getting more and more prevalent all the time. I learned that we should be a lot more careful with the planet because we only have one.