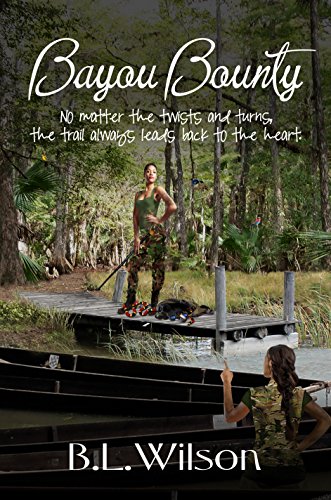 Book: Bayou Bounty - No matter the twists and turns, the trail always leads back to the heart by B.L. Wilson

about this book: I've always been curious about Black Indians living in southern swamplands. After I did the research, I thought wouldn't be interesting to have a Black female bounty hunter from the city of New Orleans lead a team a of men into the swamps of Louisiana to hunt down and capture a Black female doctor accused of murder who jumped bail. Both women have Black and Native American ancestors but only one of the women will admit it; while the other woman hides from the truth of her background. What makes this story interesting is the life journey both women must take to make them whole.

That is the premise of Bayou Bounty, no matter the twists and turns, the trail always leads back to the heart.

Jerry the bail bondsman hires bounty hunter Lou Ogletree and her crew Nathaniel Onebear and Donny Jackson to find bail jumper Dr. Grace Byland and bring her back to stand trial for murder.

Grace thinks she knows who really killed the man the DA's office claims she killed. She just has to prove it, but she can't. The killer is too powerful. He owns the world where she lives and works. So Grace does what she does best. She runs back to the Bayou to hide until she can come up with a plan. She's determined to prove who's doing this to her. She wants to enlist the help of experts.

Grace doesn't know it yet, but the experts she needs are busy getting lost in the swamp searching for her. Lou and her team of bounty hunters suit the doctor's needs perfectly. When a poisonous snake bites Lou in the swamp, Grace sees an opportunity and so she treats the female bounty hunter who hates her. Will Lou survive the poison coursing through her body? If she does, can Grace convince Lou and her bounty hunting team to help her prove her innocence?