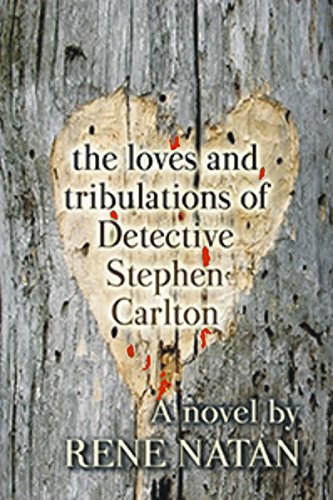 Book: The Loves and Tribulations of Detective Stephen Carlton by Rene Natan

about this book: I wanted to write about impossible loves, loves that, for one reason or another, cannot be or are short-lived; loves that leave one of the parties longing in solitude. So my protagonist, Stephen William Carlton, has looks and ability, but poor luck with the opposite sex.

A native of New Brunswick, Canada Steve has been raised by a single mother. He gives up the dream of being a pilot to appease his mother's anxiety; Steve's father died while testing a new aircraft when Steve was only a few weeks old.

After following a training course with the Royal Canadian Mounted Police, he finds a job as a constable with the Leesmer police squad.

His first real love is April, a beautiful young woman of loose morals. Even if in love with her, he refrained from dating her, providing her, however, with emotional and professional support. He longs for her, though--but this romance is not in the cards.

Steve licks his wounds by plunging into work--and soon he makes a name for himself as one of the most capable detectives in the province. He solves difficult cases and is promoted to sergeant.

Sometime later he meets Gillian, a student in journalism. Eros strikes again. They fall in love and get married. Family life seems bliss, as three children enrich their lives. Destiny is not in favor of this relationship either, and, once more, Steve finds himself alone; he dives into his work and parenting, suffering in solitude.

Years pass before the next woman comes into Steve's life--she has been trained as an athlete, she is blond, attractive and twenty years his junior. This woman, Mary Livia White, plays with high stakes: her own life. She is being chased by the law for the hideous torture and murder of prominent lawyer Peter Bishop.

Peter Bishop's murder is quite gruesome--and the entire police squad is on Livia's track. It is a massive manhunt played on the table, on the computer networks, and on the phone: done with anger, viciously, without sparing any semi legal actions.

And Deputy Chief Stephen William Carton is dispatched to South America to catch her.

A tapestry of characters surround Steve. There is Albertine, a titled lady of the jet-set whom Steve had met while vacationing in Italy; Steve's half-brother Michael, who needs Steve's help to free his girlfriend from the kidnappers; Steve's children Gordon, Larry and Luke with whom he goes moose hunting in the forests of the north; his colleague Carl Atkin of the Leesmer police squad; Osvaldo Castillo, Livia's friend and trainer; the old chief of police, who hired him and guided through his career; Vern Simpson, the new police chief who had failed to arrest Livia when he had the occasion; Edward White, the founder and supporter of an organization to protect marine species, and Marline Ferguson, an amateur theater director.

If you love romance and like to be tantalized by veiled or not-so-veiled sex, you'll love this novel. When I wrote the final draft, the hardest part was NOT to start with the last of Stephen's loves and resist the temptation to use, for the others, flashbacks, which may distract the reader from the ongoing flow. So, I structured my plot in three books. Each book contains a mystery/crime that Steve solves brilliantly. Each part, however, also contains a different kind of love. Book 1 is about the emotional and physical reaction a person experiences when she/he is attracted by another human being, for the first time, and very strongly so. Book 2 focuses on one of those extended relationships that gives stability to everyday life: the ideal setting for raising a family. Book 3 is about the courage of risking your heart one more time. Three women make a mark in Steve's life: April, Gillian and Livia. The first is passion, the second is family, the third is partnership.