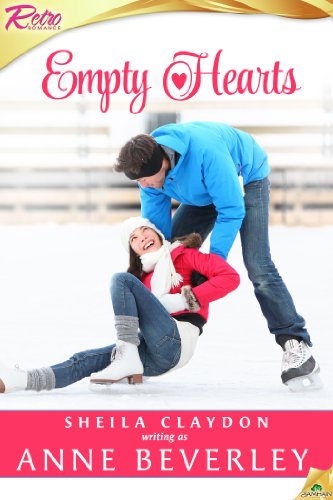 about this book: Samhain Publishing has republished Empty Hearts as a Retro Romance and I am delighted with the new cover and, equally delighted, that apart from being able to rectify the one very small mistake made by the original publisher, nothing else needed altering.

Although a lot of years have gone by since I first wrote it, I can still remember why I wrote this particular story. I had already had a couple of books published and I was looking for an idea for a third one when, idly glancing at the newspaper, I read a small piece about a diplomat in Moscow. I can no longer remember what it was about but the words diplomat and Moscow stayed in my head. I had one problem though…I'd never been to Russia, let alone Moscow, so how was I going to write about it.

This was in the days before the Internet made research easy so I had to visit libraries and look for articles about Moscow, as well as read up on diplomatic life. It was interesting but very time consuming. Eventually, however, I had all my facts. I just didn't have the characters.

I can't begin a book until I can 'see' at least one of the characters in my mind's eye. Usually I will see a picture or be attracted to someone on TV. The sight of someone in the street might even trigger it. This time, though, it was much more personal.

I was at a business lunch and the host was a very tall, polished and charming man with floppy fair hair and an unconventionally handsome face. He was also interested in the fact that I was a writer and asked me if I ever put anyone I knew into my books. I told him 'no' of course, because until then I never had. He was going to be the exception. He was going to be Dirk Van Allen, the diplomat in Empty Hearts. Now I just had to find the rest of the characters.

He never knew and now, so many years later, I can't even remember his name. I can still remember his face though and I know I made the right decision.

Four of the books that I wrote in the eighties have been republished under Samhain's Retro Label and I am delighted they have withstood the test of time so well. Apart from the obvious absence of technology in the stories, they more than hold their own with contemporary romance. They are: Golden Girl, The Hollywood Collection, Empty Hearts and Bouquet of Thorns.