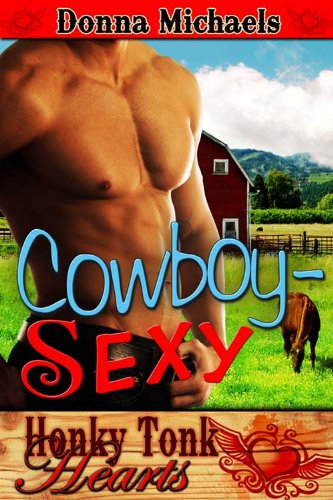 about this book: When I was first asked by my editor at The Wild Rose Press if I'd be interested in writing a novella for their Honky Tonk Hearts Series, I said yes because I knew immediately what to write. A Navy SEAL forced to take a medical discharge due to injuries received from helping a Marine, and, of course, I'd pair him with a female Marine. COWBOY-SEXY was born.

Former Navy SEAL Lt. Cmd Finn Brennan runs the family Colorado dude ranch, waiting for his deployed twin brother, his Marine twin brother, to return home, just in time for Finn to take his secret scheduled physical to return to active duty. Too bad his brother is a consummate practical joker and thinks it would be funny to send Finn a 'package' to help him out at the ranch when one of their workers breaks a leg. Bad enough the 'package' turns out to be a beautiful female with the ability to knock Finn's heart clear down to his boots, she also turns out to be a Marine. He hates Marines. Except for his brother. Too bad his brother tells their mother Finn is engaged to the gorgeous Marine. Now he has to figure out how to become 'unengaged' before his stupid heart gets involved.

Out on leave, Lt. Cammie Walker agrees to help her C.O. by working at his ranch until his return, but didn't expect to become 'engaged' to his former Navy SEAL twin who harbors an unhealthy aversion to the Corps. Dealing with his dislike is one thing, dealing with their chemistry is another. The longer she's at the ranch, the more she understands the sexy cowboy, and despite the fact her late fiancé was a SEAL, Cammie finds herself falling for her 'fake fiancé" and offers to help him train for his physical.

The Corps. took Finn's father, his girlfriend and threatened his naval career, but maybe, just maybe it has given him a reason to love and trust again.

• "Despite the difficult topics tackled, the upbeat dialogue makes this a fun read. Readers will race through this story and then preorder the next book in the series to see what is in store for outrageous Brett."
— Reviewer for Romantic Times, 4 Stars RT Magazine

• "I absolutely loved this story and I couldn't help falling head over heels for Finn Brennan. Ms. Michaels definitely knows how to give her readers exactly what they're looking to read."
— Diana, Night Owl Reviews, 5 out of 5 Stars REVIEWER TOP PICK

Thanks for reading,
~Donna

Other books by Donna Michaels