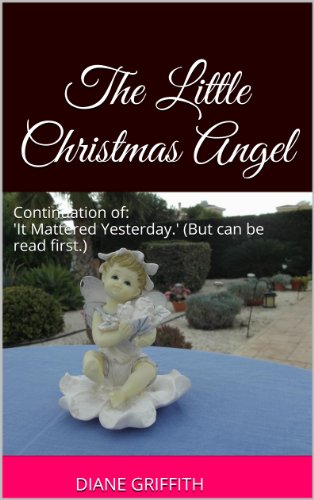 Book: The Little Christmas Angel (Continuation of, It Mattered Yesterday) by Diane Griffith

about this book: 'The Little Christmas Angel' is a continuation of 'It Mattered Yesterday'

It can be read as a first book since there are references to the story in this book.

The only possession Stella took from the grand house when she left Steve was the little angel her son Jon had made when he was ten, and given her at Christmas. She was making a new life with Geoff her new true love.

The story continues with Stella and Geoff living in Cyprus. Jon's life takes a similar disastrous path to his mother's . . . Until he meets Marianna and moves to the Philippines.

There he encounters his half-brother Carl and is more frightened than he has ever been!

While on holiday in the UK Stella meets Paul, Jon's father who warns her about Carl. She also meets Pete, the Latin charmer who makes more sexual demands on her . . .

On her return to Cyprus she hears of the horrors Carl has caused Jon and Marianna.

Can Jon and Marianna escape? Will Stella overcome another disaster?

Other books by Diane Griffith