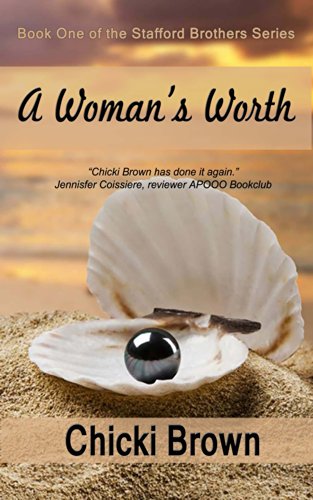 Book: A Woman's Worth (The Stafford Brothers Series) by Chicki V. Brown

about this book: I wanted to write a story about two people who don't seem like they wouldn't be drawn to each other.

Gianne Marvray is a cancer survivor. She has endured nearly two years of hospital stays, chemotherapy, radiation, sickness, lost hair, and has gone through every stage of emotional turmoil experienced with a major illness. When Dr. Stafford tells her that she is in remission, everything else seems to blossom. She attends a dinner and Marc Stafford appears at her table like an apparition. A striking, designer-clad, green-eyed apparition sent to remind her of what her life can be like once again. Her sex drive has all but disappeared during the chemotherapy treatments, but it's been months since her last infusion. Marc flicks on the switch powering her dormant desire, and it feels wonderful. He is unquestionably attracted to her, which is a tremendous boost to her ego.

For too long she's looked and felt like something the cat dragged in, but when Marc looks at her with such heat in his devastating green eyes, she feels like the most beautiful woman in the world. What harm can a little flirting do? Gianne doesn't want more than that anyway. A real relationship is out of the question. Yes, she's in remission right now, but that might change at any time, and the possibility terrifies her. It doesn't matter anyway, because in a couple of days he'll return to Las Vegas, and she will never see him again.

This book took a lot of research into the raw vegan lifestyles, and I learned a lot while writing it. I chose the cover becaue I wanted it to represent the value of a woman's life.