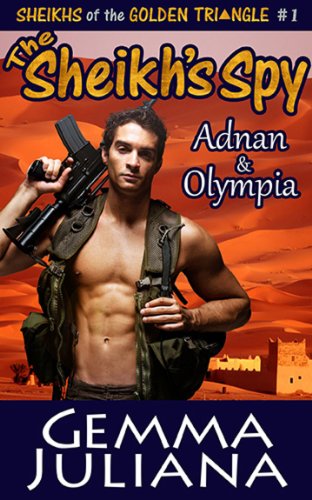 Book: The Sheikh's Spy (Sheikhs of the Golden Triangle) by Gemma Juliana

about this book: There's something about fiercely proud sheikhs and hot-blooded desert princes that captures my fancy and sweeps me away into an exotic world of romance and suspense.

If we put our sheikh in a dangerous situation, and place a foreign woman with attitude as an obstacle in his path, it adds an exciting twist. Is she a damsel in distress or a stealthy ninja? Must he rescue her, or will she save him and his kingdom?

To turn up the heat another notch, let's sprinkle in some magic, right? Out comes the paranormal treasure chest. A mysterious amulet, crafted by a witch long ago, plays a central role. A triangle of sand shared by all the kingdoms is much more than it appears to be.

I've written for years for personal pleasure, and have tons of unfinished stories. Every time a new story struck me, I'd make notes and write the first three chapters. Then I'd get sidetracked.

Several of my unfinished stories were about desert sheikhs. One day I thought, how awesome would it be to tie these stories together by creating a whole region, and several desert kingdoms with complex relationships?

Once that idea sparked to life, I sat down and wrote three stories in a row. Four, soon, because the next story in the series launches in April 2013.

The Amulet is the prequel novella, and lays out the original groundwork. Meet Oonagh the wise woman, commonly known as a witch. Her daughter became a queen. Even the best intentions go awry. Oonagh intended the amulet to be for protection. Instead, it became the source of war and enmity for two decades, with no end in sight.

The Sheikh's Spy, a contemporary novella, is the story of Adnan of Zahiria. He is a proud desert sheikh resigned to a loveless marriage alliance for the good of his people. When Olympia Green stumbles into his world, he questions everything he has ever believed. Olympia was kidnapped and held as a chattel by a neighboring sheikh. Her warning shakes Adnan's world, but can he trust her? Any of his enemies could have sent her to destabilize his country. Adnan must rise to the challenge to find trust and love, if he dares.

Christmas Spirits is a delightful love story that bridges this world and the next. Sheikh Khazan married an Irish beauty long ago, but death stole her away too soon. They've reunited every Christmas Eve since her untimely death. This year, things will change forever. When Anna arrives at their Irish castle, Khazan finds she has bargained away their future visits for the joy of being physical together one last time. Will Khazan have the courage to go with her this time when she leaves forever? Or will he stay at the castle? This novella reminds us there is no division between this world and the next when true love is at the core.

I learned so much from Adnan and Olympia, Khazan and Anna, Oonagh, Zoe and Jacobo. Characters have a life of their own, and do what they want. You can try to bend them to your will, but you can't. They'll get you out of bed in the middle of the night to rewrite a scene the way they want it.

I love crafting these exotic worlds and passionate characters. Thanks for reading this and I hope you'll visit my website, enjoy my books, and connect with me!