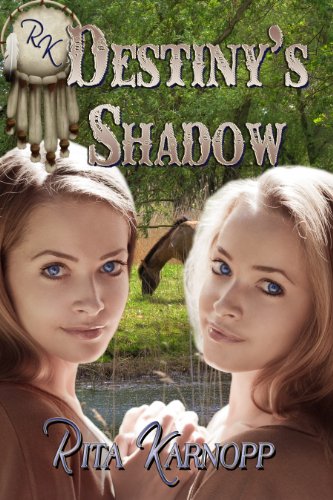 about this book: In 1867 many white men adapted to the wild mountains in the Territory of Montana. They made friends and shared the land with the few free-living Native Americans who refused the white customs. Most Indians of the time had been moved to reserves and were dictated by the Indian agent (kinnonna). Honest they were not and yet they had been given complete authority over the lives of the Blackfeet people.

Destiny's Shadow is the story of twins, separated at birth. Laura Hewett is strong, independent and trained to take care of herself. She is raised by her father in the wild mountains, the Native Americans were her neighbors and friends.

Lilly is spoiled, self-centered, and strong-headed. She is the sole heir of the Rolston Prickly Pear Ranch as well as the Rolston rich gold-producing Golden Eagle Mine.

On her sixteenth birthday, Gerhart Rolston, whom Lilly believes is her father, reveals she has a half-Indian brother, Jason Rolston, and she is suddenly faced with a wild, uneducated twin. Lilly vows she will never share her inheritance with either of them.

Lilly and Laura are thrust together when kidnapped and taken across the plains to be sold to mountain men, brothels, or worse, to the Indians. It takes a green-horn attorney in love with Lilly and a half-breed, Jason, with proof Rolston is not the twin's father, to rescue them.

This story takes you across rough land, mountain men, natural challenges, and the determination of sisters who discover together they can overcome anything. Perhaps it is time for a trading post with honest agents to help the healing between two nations destined to exist together.