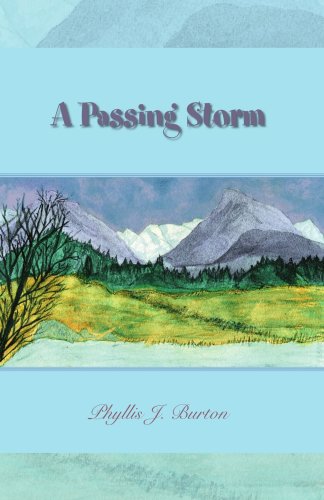 about this book: A PASSING STORM was originally published by Trafford Publishing POD in July 2006. I withdrew the title earlier this year and the publishers of my book PAPER DREAMS (Matador (Troubador Publishing Ltd.) of Leicester England, agreed to republish it. Although the republication date is not until 1st February 2013, it was made available on the 1st November 2012 on the Publishers' bookshop and on Amazon.

The Prologue of A PASSING STORM features an 'Out-of-Body Experience' by the main character Jennifer Redmond. Her marriage to Peter Redmond has deteriorated to such an extent, that she decides to leave him and journeys up to Scotland where she meets Angus Cameron in the hotel where she is staying and they are immediately attracted to one another. Jennifer loves walking amongst the hills, lochs and mountains in the area and decides to go out alone. A fierce storm develops, there is a landslide and Jennifer, in trying to climb up a rocky mound, falls and is badly injured.

Jennifer is eventually rescued by helicopter and taken unconscious to hospital. Husband Peter in the meantime has discovered where she is, travels up to Scotland and visits her in hospital. When Jennifer wakes up she has lost her memory, and unaware of the reason why Peter wants her back home so desperately. He is about to be promoted within an American company and erroneously believes that he has to have a 'loyal' wife in order to do well. Jennifer's memory returns, but despite her reservations, she agrees to return home.

Jennifer's life gradually returns to normal. Peter spends most of the week in a flat in London. Once Peter is promoted, he takes her and his secretary, Susie to New York so that he can meet everyone at the company's Head Office. On their return home, they are greeted with the news that their elder son is getting married and a date is set for the wedding. Jennifer is delighted and goes up to London with a friend to buy a new outfit. It is raining hard and Jennifer decides to see Peter's new office. When she walks into the building, Jennifer overhears the conversation that the receptionist is having with a friend. She is devastated when she hears that Peter is having an affair with Susie. She returns home. Someone else also learns about the affair and sends Jennifer some poison-pen letters. Jennifer decides that she will not confront Peter until after their son's wedding.

Thus begins a time of heart-break for Jennifer. She realises that her feelings for Angus have deepened since spending time in Scotland. There are many twists and turns to this story: Angus too is broken-hearted when Jennifer returned home. He returns to the outback of Australia where he'd spent a lot of time in the past.

The actions of a rather thin straggly Dingo-dog in the Australian bush, eventually persuades Angus to return home and seek out Jennifer. A happy ending? Clever dog.

My reader would probably be someone who enjoys a truly romantic story, but one with many tragic twists and turns. There is a happy ending. I love to dabble with water-colours and I painted and designed the cover of A PASSING STORM.