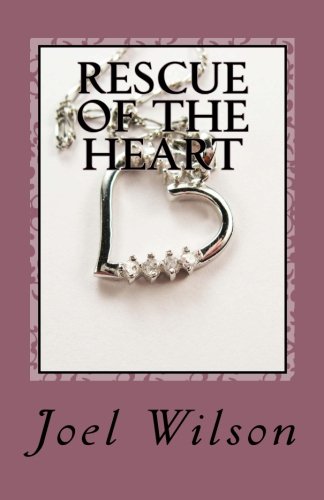 Book: Rescue of the Heart by Joel Wilson

about this book: Rescue of the Heart is a story of a man and a woman; how they met a fell in love. Because of the death of Jonas' parents he returned to his childhood home in Nova Scotia to take over the family business. Stacy remained in Virginia until she was able to sell their house and then she was to join Jonas and start a family in the small town of Kilcreggan.

Her airplane went down during a violent storm in the North Atlantic. Her body was never found and she was pronounced dead.
His love for her was so great that Jonas was devastated and in his heart he held out hope that one day he would be with Stacy again.

Time and Stacy's absence took its toll on Jonas and he found himself falling for another woman. When a news story kindled a fire in his heart and reinforced his feelings of hope, Jonas decided to search for Stacy himself.

My inspiration for writing this comes from 3 sources: 1) The intense feeling in my heart that I knew that I could do it. It had been a suppressed dream of mine since High School; 2) The constant feeling that if I continued to work for other people I was going to die an early death from all the stress, which is a bad idea for anyone; 3) I needed to be able to do something that I like when I retire so that I wouldn't go back to work for Walmart like so many retirees have.

My primary readers are probably professional women. Men, if they can get past the cover and the lovey-dovey stuff will find the adventure and action very interesting.

It has taken me 4 years to write this; that includes all the re-writes and editing.

The title finally arrived to my brain just recently after pouring over numerous ideas.

I chose this cover because 1) it is attractive and not cluttered; 2) the picture of the necklace relates to the story as it is the necklace that Jonas gave to Stacy on their honeymoon.

I'd say that the hardest part of writing the book was coming up with the title and cover. The story itself just seemed to flow after I watched some leaves fall to the ground.

My research involved a lot of studying things online and actual real life experiences. I had recently visited Nova Scotia and fell in love with it and especially the people there. I spent many hours studying about the North Atlantic, Sable Island, sailboats, local papers, towns in Nova Scotia and Scotland, and researching names and their meanings.

What I learned from writing my book was that I was right. I could do it and I did. Now i am anxious to work on other writing projects and flood the world with my imagination.