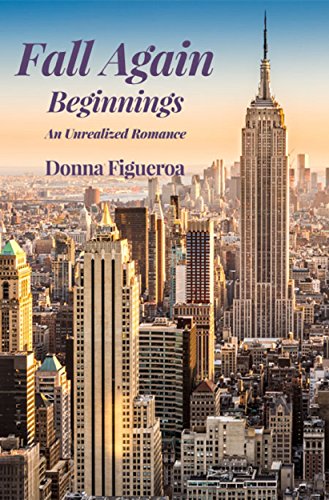 about this book: I began writing what would become Fall Again in November of 2012. At the time I was writing what I thought would be a stand-alone romantic novel involving two people; best friends who fall in love then separate suddenly only to run into each other more than twenty years later.

That was the idea. But by the time I finished my first draft I realized that my simple little idea had grown into more. My story not only dealt with an unrealized romantic relationship, but with friendships, building careers in an industry that is often misunderstood, changes in the culture and technology and family relationships.

I also saw that while I had a decent beginning and end to my story, I didn't have a middle. I'd grown fond of my characters and respected them too much to ignore the twenty years between their separation and reunion. I got to work, and the result is the Fall Again Series.

In Book One Beginnings, readers will meet Marc, Lauren and their closest friends in the optimistic New York City of the late 1980's at the beginning of their careers. Marc and Lauren become good friends despite an obvious attraction. Among the obstacles of the couple's way is Marc's longtime girlfriend. Maintaining the façade of friendship to each other and to those closest to them becomes increasingly difficult.

While I never set out to write a series of novels, I must admit that at times my story seemed to write itself. The story is set in the entertainment industry, an area that I know fairly well since I have been a working actor for quite some time, booking my first professional job when I was still in college. Several of my ideas were inspired by my own experiences and the experiences of other actors I've known and worked with over the years. (Yes, I do know an actor that worked as a baker in an erotic bakery early in his career.) I found it amazing that more than once new characters suddenly appeared when they were needed (Lauren's friend stand-up comedian Hannah Moore for example), and I found myself seamlessly weaving them into the story.

But to be honest, during the time I was writing Fall Again, I would hit periods of self-doubt. I wondered if anyone really thought about the one who got away, or a first love. But then I'd find myself in conversations with both men and women only to learn that many women have a Marc in their pasts, while many men have had a Lauren somewhere in their lives. One day I questioned myself if it was really possible for two people to reunite after two decades of separation. Within a few days I learned that a friend had become engaged to a man she had known twenty years earlier! So I kept writing.

Above all I wanted to write a good story while asking people to consider the following; What if you met the perfect person-your best friend, soulmate, and the great love of your life…but at the wrong time?