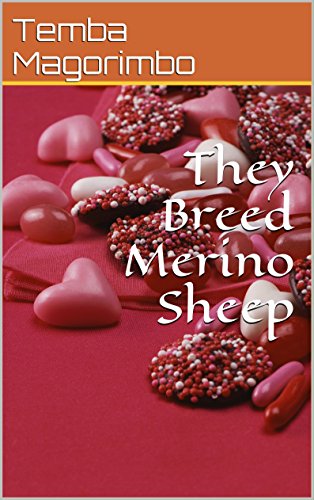 Book: They Breed Merino Sheep - [dances with a lion] by Temba Magorimbo

about this book: Dick Taruvinga grows up in a small scale farming community near Chegutu in the then Rhodesia. Growing crops, having citrus fruit trees and raising beef cattle that are rarely sold but used as bargaining chips is not the life Dick learns as the best at boarding school. When he goes for boarding school, he meets other cultures and creeds within the same racial mix he is in. They teach him a lesson or two. He has to make it through his African roots, culture and customs combined. Then there is the spectre of polygamy, will he follow the footsteps of his father and some of his elder half-brothers? He is a light to his family as he does what no other person in the polygamous family has ever done, he passes his ordinary level. In quick succession, his blood siblings follow suit becoming the only branch of the polygamous family to attain diploma and degrees. Dick finds work in a hotel which a step up the ladder. No black man sups or drinks at the hotel, it's entirely for the whites in a racial discrimination era. He works there while studying for his advanced levels staying within the periphery of Chegutu (Hartley then) during the dominance of Rhodesian racial rule. He has a job, he has a class and the rural girls look up to him. Will he bow down to temptation or will he chase after higher life/education? Dick applies for a management training program as the economy in Rhodesia is opened to the Africans with the armed struggle ensuing inn the African bushes. He is training to be a hotel manager. He only trains for half a year when he gets a scholarship to do a four year degree Australia. This was manna! He undertakes his four year degree program with a year on attachment. He takes to sports, Aussie rules football akin to rugby. His star is rising. There he meets the girls that charm the daylights out of him, that make his head turn. Somewhere in dreamland he meets Brenda. African culture versus modern culture clash. As his team moves from one college game to another, she follows him, romances him and ties him to her little finger. They have their ups and downs as they date. Once in a while they have weird, wide chasms which they later bridge.

Brenda and Dick marry in Australia. The North and South Pole in opposites. She harangues him about his beliefs and cultures. She refuses to come back to Zimbabwe with him after independence, when the guns had long since been silenced. Where will his love life go versus African tradition/culture that a man of his age should have a wife and many children. He only has one wife, a Caucasian and one child! Dick lands in Victoria Falls proper, the tourist haven where he manages a popular resort hotel. There he meets one of the Administration managers, Shirley, unfortunately she is a Caucasian. Unfortunately, when Caucasians grew up in the then Rhodesia, they were taught to subject the Africans to third class citizenship with them being the first. He has to deal with love and clash of cultures and races worse than in Australia. In the end, whom will he settle for, Shirley or Brenda? Will he save his marriage by crossing back to Australia or will he marry Shirley if he can bully whack her proud and disdainful parents. In the middle of the pack are two elephant bulls that lock horns fighting for dominance sorry tusks. A young bull challenges an older one for breeding rights to his mother's clan, near a game reserve fence for hours leaving the game fence damaged. What does a game fence have to do with Dick? An old lion thrown out of its pride by younger lions goes on the loose finding humans easier targets than wild animals sending a scare throughout Victoria Falls. The issue is made worse by a slight mistake by a professional hunter and his German client. The lion is roaring mad. The lion and Dick's path are set to converge after which love matters will be settled when the mane and fangs are dealt with man's ego. Who will remain when a lion and a human being fight for survival?