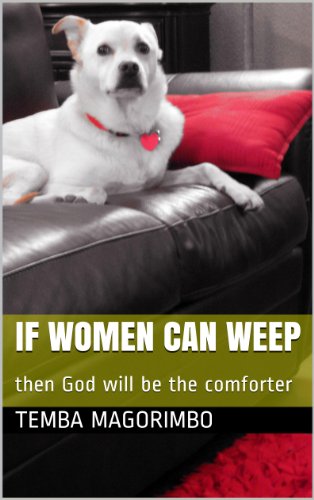 Book: If Women Can Weep - then God will be the comforter by Temba Magorimbo

about this book: There is a country once called Rhodesia which is shaped like a teapot with the lid to the north alongside the Zambezi River, the base to the south alongside the Limpopo River while the handle is made up of the Eastern Highlands bordering on Mozambique. In the middle, almost, is the city of Gweru while to the extreme southwest is Bulawayo and to the northeast is the citadel of Harare. The mouth is the Zambezi River before the Victoria Falls at the place where five nations meet. These are Zambia, Botswana, Namibia, Angola and Zimbabwe. Gweru sits on a watershed that divides the rivers to head towards the east towards the Mozambique Channel and to the west towards the Zambezi and thus to the Mozambique coast too. In this country live different races, Caucasian, half-Caucasian and half-African normally called coloureds, people of Asian descent once classified alongside coloureds in the racial discrimination times and the majority and populous African blacks who are now the governing class.

In the middle of the country once called Rhodesia, is a city called Gweru, which is the hub of the nation now and then. In it are the industries that keep the nation's gears working like glass making, chromium alloys, footwear, iron casting, battery manufacturing and a few scattered mines. In the city grew one Patricia Daniels in the period when there was racial segregation between the minority whites and the majority blacks with the coloureds caught in between. The coloureds and their counter parts the people of Asian descent where in one rocking boat in the middle of the pack between the elite white of Caucasian stock and the African blacks. The coloured/people of Asian descent looked down on the blacks while they themselves were looked down upon by the Caucasians. The whites then referred to themselves as European stock even though they might have been born and bred in the country then called Rhodesia.

Patricia is a lively character full of life that transcends the racial divide to make friends with coloureds like Anita. There is a difference in character and behaviour between Anita the coloured and Patricia the Caucasian girl. They have a combining theme between them. They stand by each other in times of trouble and assist each other. In those times, strife was the common password for the civil war that was raging as the black nationalist assisted by the Eastern bloc including China, North Korea and Russia sort to break the shackles of racial discrimination. In the same vein history was being made that yet another African country would fall to socialism that would in term rid the country of economic stability, political freedom and progression.

Patricia Daniel meets Michael Du Plessis when he nearly ran her over with a vehicle because he had been careless. She blows hot over him but his attitude was to accept and absorb all the harsh words she threw at him. He returns her cheeky words with great senses of humour and Christian morality. Michael is an n electronics engineer, who did his trade in West Germany. He grew up in both Cape Town and Mutare. Being of Boer stock he is a charming, handsome and intelligent person full of charisma. He does not have the ire that drives people of his stock like the Boers firmly in control of both The Nationalist Party since 1947 in South Africa and the government therein. He has his own heartbeat that beats slowly and is saturated by church love and prayer. He is now based in the city of Gweru, which has a strategic base, Thornhill Air Force base. Michael was serving with the Rhodesian Air Force during the civil war from 1974-1979.

Patricia does what her mind did not think was possible when she marries Michael Du Plessis shortly after the bereavement of his pastor father. Differences arise. Michael is a carefree person whose parents are of Boer origin. His father had cast aside his inheritance in wine estates to be a church pastor for the city of Mutare while his mother had stood head over shoulders alongside her husband. His brother was doing well as a civil engineer in Australia married to a woman who refused to live her native Australia for the then Rhodesia. Will Luke and Mavis Du Plessis's marriage survive in the face of the Christian virtues of the church the senior Du Plessis and wife ministered in? Patricia is the type of girl who really throws her heart to one person at a time. What will the future hold for her? Bliss or the normal heartbreak when two people marry and fail to click? But instead, she faces the heartbreak of having her husband die in a tragic road accident. Who will stand by a widow in her time of trial and morning? Who will befriend her years later when the pain has receded to the back of the mind and only memories remain?

With Michael gone will Patricia be able to stitch up her life again and live with her two growing children and still maintain a cordially relationship with her mother-in-law who is a widow too? What will her relationship be like with her late husband's friend and his cheeky, proud and divorce intending wife? Will she, schooled in the moods of the church be able to serve their marriage too? What of her coloured friend Anita with her different cultural outlook. Will she conform to the laws of the church that Georgina had followed for more than eight hers of her marriage? She meets and befriends Jonathan who is a well to do engineer. She has to make a decision on whether she will maintain the sceptre of Michael her late husband or choose a new life with Jonathan.

She chooses instead to let the sceptre of Michael live with her. The story is told in flashback from the moment Patricia meets Michael in a departmental store in the year 1979 when the country then called Rhodesia was in transition from civil war to independence. The story examines the importance of friendship between Michael and his friend Stephen and the effect of Michael's early demise on the marriage of his best friend Stephen and his wife Judith who were on the divorce track.

If women can weep then who will be the comforter?