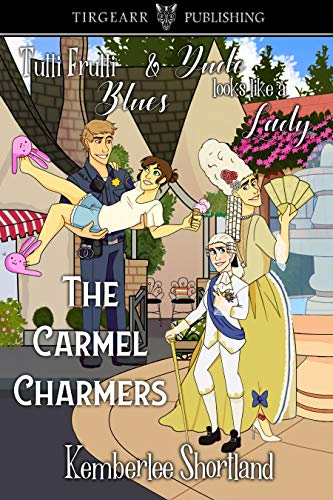 about this book: For Tutti-Frutti Blues -- Town therapist Maisie Daniels is having a bad day. A failed alarm clock makes her late for work, she's locked herself out of her house and worse, she's half way across town when she realizes she's wearing her bunny slippers. A double scoop of tutti-frutti ice cream is just the ticket to boost her mood.

When Sergeant Jake Hennessey spots a woman in bunny slippers muttering to herself in the park, he wonders if she's one of the local eccentrics. When she steps from the ice cream parlor with her double dip in hand, Jake decides not to cite her for eating ice cream on the street, a recent ban, but invites her to dinner instead.

When Jake arrives at the restaurant and sees Maisie in her bunny slippers, he knows instantly that he could love her.

For Dude Looks Like A Lady -- Pamela Howard can't believe what she let her friend Maisie talk her into—a charity costume contest where she's made to dress as King Louis XVI. Her partner, dressed as Queen Marie Antoinette, reminds her of a man she's spent five long years trying to forget.

Hank Delacroix is ready to throttle his friend Jake. Hank is a great clown around his 49er teammates, but six-inch heels and a poodle on his head are a bit much. He has to be the tallest drag queen in the state. When he meets his Louis partner, he can't keep memories of the only woman he ever loved from waking in his mind.

When Hank realizes Louis is his ex-fiancé, he has to find a way to make her stop running away from him so he can finally apologize