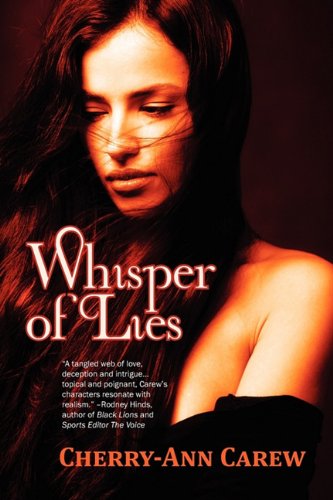 about this book: Hi, I'm Cherry-Ann Carew, author of Whisper of Lies. Are you ready to immerse yourself in a tale, where you travel with the beautiful Lavina, through years, geography, parents, elders, children and men?

Can you imagine being fifteen-years old, and ridden with guilt and grief because your life is spared after a car accident kills an uncle and your grandparents—also your care takers? Can you imagine moving to a different country to live with a mother, who abandoned you—only to be rejected once again?

Add three children and an unhappy marriage thirteen years later, and Lavina did not think life could get worse. That is, until she meets the suave Lamyal Campbell, an entrepreneur whom she falls in love with, creating further emotional and moral conflict.

So, how did Whisper of Lies come about? What inspired me to write this book? I had been carrying around an image of a young girl in my head for years (I have no idea why) and once I decided that I was ready to write a book, I'd already determine that she would be the main protagonist, but what would I do with her? What would her life be like?

Well, I've always been intrigued with human experiences, that which is a part of life – both good and the not so good and decided to plot a story around her. I also wanted to include culture and diversity in my writing; as such, her story begins in Guyana, South America and continues to London, England.

Now, coming up with the title was problematic. I initially played around with four other titles before settling on Whisper of Lies. I was certain that this was suitable, because there are a lot of lies, not only in Lavina's life, but the other characters, too. I felt one hundred percent comfortable with it after asking a few people which title they liked; they agreed that Whisper of Lies had a certain ring to it. I then had to find a cover that would complement the title and the story.

I had already made a decision that I wanted a simple head-shot and after searching over two thousand images, I fell in love with the current image. I felt her facial expression asks a whole lot of questions, which could only be answered by reading the book.

Writing the story was certainly a challenge, given that I am also an editor, meaning, I was constantly tempted to edit as I write. I must have read the book cover-to-cover over fifty times! Nevertheless, I have since learned that it is best to do a brain dump, then edit, if not, it's not only a waste of time, but it limits my creativity and intercepts my flow.

However, Lavina's and the supporting characters' tale is replete with emotion due to challenges and thought provoking situations I created for them. Many readers (predominantly female) tell me they can relate, though I have received fantastic feedback from male readers, too. This pleases me (not in an egotistical way), as it tells me that I have done my job, since I write novels to entertain.

I sincerely hope that you, too, will enjoy the book and I would love to hear your feedback.

Video: Whisper of Lies - a novel by Cherry-Ann Carew