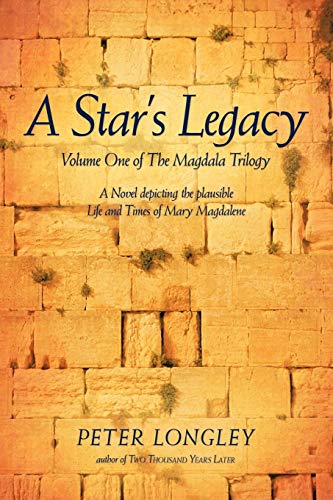 Book: A Star's Legacy - Volume One of The Magdala Trilogy - A Six-Part Epic Depicting a Plausible Life of Mary Magdalene and Her Times by Peter Longley

about this book: This is the first volume in a trilogy of novels by Cambridge theologian Peter Longley on a plausible life and times of Mary Magdalene. Although this first volume is mostly fictitious, it sets the stage for the slightly less fictitious second and third volumes. The principal three characters of THE MAGDALA TRILOGY are born in this volume, and their early lives explored. Linus Flavian is a fictitious Roman, but Joshua is based on the quasi-historical character of Jesus, and Maria on Mary Magdalene. The historicity of the early life of Jesus is very sketchy in the synoptic gospels of the Bible, and the nativity scenes of St. Mathew and St. Luke, written well after the events (the best part of 100 years later) are not only quite differing accounts, but probably pure fiction. Some fifty years later again, within the Coptic collection of the Nag Hammadi texts found in Egypt, we come across a non-canonical work that gives a very different interpretation of the nativity and early life of Jesus--The Proto Gospel of James. Longley has followed some of the ideas expressed in this document to create his fictitious history of the early life of Jesus and of the Virgin Mary and her family.

Although fifty years later in composition to the traditional versions found in St. Matthew and St. Luke's gospel, the version in the Proto-Gospel of James has a much more plausible ring to it that skeptics of traditional Christianity might find more relevant. The fictitious story of Linus Flavian, is really there to provide the reality of the Roman world in the Judea of the early first century. Sepphoris, the main seat of Roman influence in Gallilee and only six miles from Nazareth, is never mentioned in the New Testament, yet it must have had an influence on Nazareth residents. In Longley's novel, Linus Flavian and his family become the mouthpiece for explaining this very important historicity that the synoptic gospels all but ignore. With one foot in the Roman world and the other in the Hebrew Galilean world, Maria becomes a mouthpiece, too, for a more plausible explanation of the times, and leads the way for a very different interpretation of Jesus in the second volume of THE MAGDALA TRILOGY, BEYOND THE OLIVE GROVE. Finally, we come to James, the brother of Jesus, whose name is given to the much later Proto-Gospel of James. In A STAR'S LEGACY, we see James as Jesus' mentor and a formative influence on him during the plausible period that the Holy family might have lived in Egypt in Alexandria, the greatest place of Jewish scholarship within the Roman world. The lives of all three of the principal characters come to life in a novel that truly breathes the world of the early Roman Empire of the first century, and sets the stage for an interesting re-evaluation of the historical life of Jesus during his ministry as it will be laid out in BEYOND THE OLIVE GROVE.