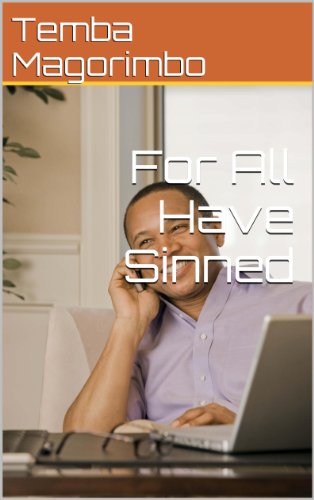 Book: For All Have Sinned by Temba Magorimbo

about this book: They lived in the era of the might of Rhodesia. That was when the black person had started thinking independently asking for a greater say in government. Race was divided into three tiers with the Caucasian at the top, the Asian descent and mixed race following with the black person subjected to the class of non-citizen. The middle races looked down at the last race. Racial fights between the mixed bloods and their pure blood African cousins were not uncommon. Even race was prevalent in education, college, vocational training and choice of business and where to farm. Race determined the type of business and the type of board or type of promotion three different people with same qualifications could chase after. The black man was always lost and last inn his own country. About six siblings grow up in a three roomed council house, viz with a bedroom, lounge and kitchen. The toilet is a sprint away at the corner of the yard. It is a bucket system collected once in a while by a tractor and wheeled tank. Woe to you if it fills up before collection or you are sitting there with a running tummy as the bucket is unceremoniously removed for emptying or when nature decides to visit in the middle of the night with thieves prowling. Piped water and load circuit electricity are available. Use a 3-plate stove with oven while the lights are all on and it trips, no meter. The siblings chase the racial system that subjects them to a working class life away. One becomes a long distance runner of repute. His bursts of adrenalin towards the finish line make him a celebrity even with the other races. Another becomes a sprinter who gets to finish far ahead of his same age compatriots. The other becomes a boxer extra ordinary. What effect will the Rhodesian bush war have on the siblings as they grow up in a society where dining with the Caucasian is considered a sell-out? What of the call of the time coming a tide as young men and women start trickling out of the country through the porous Rhodesian borders to train as guerrillas and come back to haunt their former Caucasian tormentors. As other black people join the ranks of the professional Rhodesian African Rifles regiment, what will happen in black on black gun battles? As success beckons, extra financial hands come to help the sports minded, what effects will the extra cash have on a pack of boys bound to experiment? What of their eyes spotting sisters and their trailer loads of suitors? What of night club dancing queens, peer pressure and the scourge of sexually transmittable diseases and the arrival of the deadly AIDS/ HIV have on society? Will their marriages stand the test of time when cash resources cause a strain in their cultural and customary ties to marriage? What of the post-independence era and its challenges to a new government, new system and brand new socialist ideas? Who will break down the customary and cultural lines in favour of the modern trendsetting 80's?