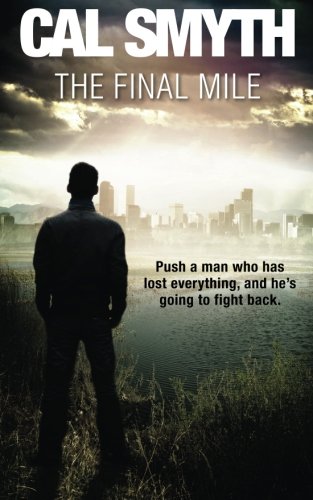 about this book: The economic crisis was just hitting home. Not only were banks bankrupt, whole countries were in need of bailouts. But while the taxpayer bailed out the banks, the CEOs were giving themselves bonuses. I'm no economic whiz. If I was, maybe I'd be working in The City instead of teaching and writing. But something just didn't add up. And every time I saw the headlines, I felt sick. Physically sick. Luckily there were photos of Bob Diamond and George Osborne in the accompanying articles to mop it all up.

Out of this, came the initial idea for The Final Mile. The Government came out saying it was time to stop the banker-bashing. I didn't think there had been enough. Various CEOs and bankers were getting away with ripping Britain off (and still are), so I wanted a fictional protagonist who would make them pay.

I'm not particularly political and I wasn't after some polemic. The protagonist couldn't be an anti-capitalist activist as that would be too obvious. It had to be the last person who would try to take down the system. In The Final Mile, Ryan Morgan is a good guy, a family man who lives by the rules. It's only after his business is liquidated, his house repossessed and his wife leaves him, that he takes action.

As I planned the novel, I referred back to Point Blank by Richard Stark and Valdez is Coming by Elmore Leonard. In Point Blank, Parker is conned out of his money and left for dead. Relentless in his mission, he seeks revenge and tries to get back the money he's owed. What he hadn't reckoned on is that the criminal syndicate he's up against has morphed into a capitalist corporation, a precursor of the vulture capitalism we see today. As he works his way up the chain, it becomes the tale of an individual versus the system.

In Valdez is Coming, the protagonist is a town constable who tries to ensure justice when a powerful rancher has an innocent man killed. For attempting this, he's completely humiliated, pushed to the brink until he fights back. Valdez relentlessly kills off the bad guys one by one until he gets to the rancher. The writing is sparse, the plot is classic revenge western and you're with Valdez all the way. Both books were written awhile back (Point Blank in 1962 and Valdez in 1969, crime and violence at the height of the peace and love movement) but they are great reads and served as good templates.

Ryan would start with the bank manager who initiated the liquidation and repossession. He'd move onto the bank CEO who gave himself a bonus while receiving a government bailout. And from there to the government and The City where the deals were being made. To correspond with this, I wanted Ryan to start local and become national – leaving his life in Swansea as he treks cross-country to London.

With my protagonist, setting and plot in place, I wrote at speed, turning out a chapter per day after work. While writing The Final Mile, I drew on my family history and read George Pelecanos. Although I'm not politically active, my parents are, organising demos against cuts, bombings and fracking. Further back, my granddad was a Communist and union leader. An electrician in Ireland during the fifties, he was blacklisted and came over to work in Swindon Railworks. With not enough money to pay for ferry tickets for the whole family, my mum was brought onto the ferry in a suitcase. A true story. Thinking about the lives and political actions of different generations in my family helped provide depth for Ryan's backstory.

Pelecanos has steadily become one of my favourite writers. His books are thrilling to read, but it's his realistic depiction of interlinking lives caught up in crime that is powerful. Like Stark and Leonard, stylistically he's brilliant, hardly wasting a word and accurately capturing characters. He's also one of the few writers whose books bring me near to tears. A child suddenly killed in a gangland crossfire. A white man and black woman who can't quite make their relationship work. The love and deception in family relations.

My first novel Wrong Way Around was deliberately noir, driven by plot and character, love turning to hate with just a glimpse of the outside world. Pelecanos writes novels that are incredibly gripping but also carry the convictions of what he wants to write about – his Greek heritage, Washington DC, social deprivation and the hope of education. This gave me confidence with The Final Mile to include social drama. I wanted it to be a fast-paced read but also to catch a glimpse of a broken Britain menaced by economic crisis.

With The Final Mile written so quickly, the killer was the re-write. In discussion with my editor, what seemed to be lacking was initial empathy for Ryan and a bit more realism with the CEOs who were killed off. At the time I was watching Breaking Bad, one series after another, and I thought that's what I want – a good guy to bad guy moral turnaround. I needed the reader to empathise with Ryan, feel his humiliation and urge him to get revenge. We'll have to see if I've achieved that.