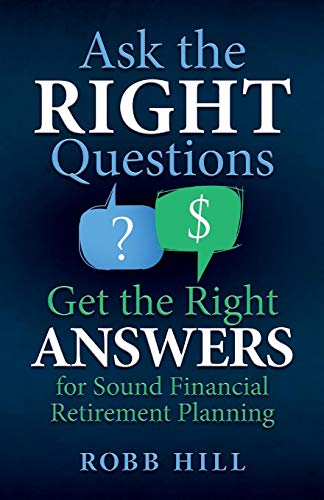 about this book: Ask the Right Questions, Get the Right Answers for Sound Financial Retirement, the first book of its' kind to truly give everyday Americans an easy and informative way to get their retirement plan started or improve an existing plan.

"In talking with my clients, one thing that became very clear was that they were in serious need of guide that would make it easy for them to talk with financial professionals in order to prepare for retirement, said Robb Hill President and Author. "That's what this book is designed to address."

• Many people think that retirement is an age, but it is not; retirement is a financial position that needs to be planned and maintained.
• Healthcare is very costly and has bankrupted many seniors.

With Ask the Right Questions, everyone will learn:
• How to avoid probate
• How to choose a financial advisor
• How to position their assets
• How to prepare for the high cost of health care and much, much more.

As I was growing up; and learning from my elders, it became clear that we work to get what we want. As I have gotten older and more informed, this mentality of working to get what you want is only half of the truth.

We must revisit the past in order to gain some insight into our current situation: In short, the depression of the thirties began early for farmers and the working class. In 1929, just before the bust, when poverty level income was estimated at $1000 per year and a family of five needed $1800 per year for "minimal health and decency," no less than 42 percent of all U.S. families earned less than $1,500. Some workers, of course, were making it, particularly workers among those immigrant groups that included many artisans, trades people, and skilled workers (i.e., people who were already at the top of the working class), such as Jews. But for those less fortunate-Italians, French, Canadians, Poles, Ukrainians, and especially Black Americans and Mexicans- the twenties provided no escape.

Nevertheless, prosperity and the rise of a consumer society did have a major impact on the middle class and on at least part of the working class, and it requires closer discussion. Recall that as early as the 1890s the American economy had shown signs of stagnation because of the apparent saturation of consumer markets. There were two readily apparent ways of solving this problem: expansion of both trade and investment abroad and consumption at home. We will not discuss the former, for it only had an indirect impact on domestic social policy. As for the latter, to state the solution merely raises another problem: how could the consumption of the American people expand, given that most Americans were already spending every cent they earned to ensure bare survival?

The answer, in essence, was to persuade people to save less of their income (if they had any to save), to spend it all, and then go into debt- that is, to spend more than their income. "The future of business," wrote one trade magazine, lies in "its ability to manufacture customers as well as products.

"Advertisements and the mass media are used to create the image of a consumer society; in propagating the ideas of "right living," they did their part." What was needed, it should be emphasized, was nothing less than a major change in American values. "Industry," recalled Boston merchant Edward Filene some years later "was perfected to a point which made it absolutely necessary for the masses to spend their money freely and to unlearn their previous habits of thrift." Buy instead of save; consume instead of work; go into debt; live for today, not for tomorrow.
"The Altruistic Imagination" (Cornell University Press 1985) pp48-49, 50 John H. Ehrenreich.

It is difficult to overstate the magnitude of the change in values the new consumer society required and created but, this mentality has a much greater price and that lies in the fact that many working class people will become dependent, in their latter years.

My childhood was turbulent to put it mildly; I am from a broken family and I was raised by my Mother with a younger sister and brother. There were times that were tough to say the least. We were on public aid and, I was ashamed of that. I used to be so embarrassed to go to the store with food stamps.

The term "Consumer Driven Economy" has taken on new meaning to me, and what it means to the people that are targeted by advertising on a continuous basis to spend, spend and then spend some more. The aforementioned quote is a reality that is wreaking havoc on the baby boomer generation.

At this point in my life; I have come to the conclusion that we each have two options: "manage debt" or "create wealth." The key word is "create." The vast majority of the people that I come in contact with on a professional level are stuck in the management of debt and odds are; if you have payments now, you will until you die.

Video 1: Learn How to Prepare for Financial Planning
Video 2: Ask the RIGHT Questions Get the Right ANSWERS for Sound Financial Retirement Planning