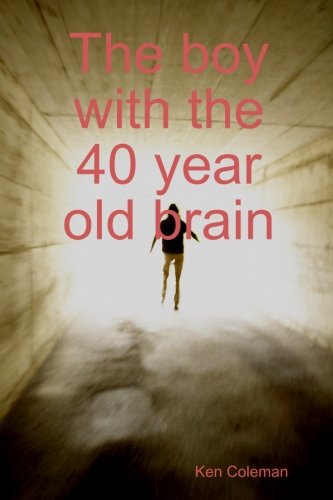 Book: The Boy with the 40 Year Old Brain by Ken Coleman

about this book: This is the fictional story of a 40 year old heart attack victim who has his perfectly functioning brain transplanted into the head of a 7 year old, brain dead boy. The bizarre situation he finds himself in causes him many unexpected problems, not least, his relationship with the unsuspecting mother of the child who's body he occupies. Rose, the child's mother is exceptionally beautiful and very tactile with her so called son, so much so, that the man in the child finds himself in a constant battle to suppress his manly emotions as the child's mother constantly cuddles him causing him to become aroused on several occasions. However, to his credit, he always manages to hide his discomfort from the boy's mother. Especially during one hilarious situation when she decides to give him a bath. The story, however, isn't just about the man/boy's relationship with his mother. It is also an adventure, where some unlikely characters come together, including Rose's dysfunctional sister, Angel. Alice, the strange girl from next door and the boy, Tom's over attentative nurse. They all find themselves in a race against time to stop an evil, and very rich, paedophile from having his own, brilliant brain, transplanted into the head of a perfectly healthy, East European orphan boy. The reader will find this story, funny and sad, with some tragic moments. But hopefully, enthralling with a surprising twist.

I decided to write this book whilst day dreaming and wondering what it would be like to relive one's life knowing what you know now. Being able to rectify all one's mistakes, whether, financial, romantic or family orientated. Who knows, sometime in the future, a brain transplant may be possible. Although, transplanting a man's brain into a child, certainly would be ethically and morally wrong, not to mention, unlawful.

It took 2 years to write this book, having become disillusioned on a couple of occasions. I'm pleased now, that I persevered and went back to it. The thrill and sense of achievement I got when I finally completed it, was, to say the least, one of my greatest pleasures. I think the story will appeal to a wide variety of readers, including readers of fantasy, romance, and adventure.