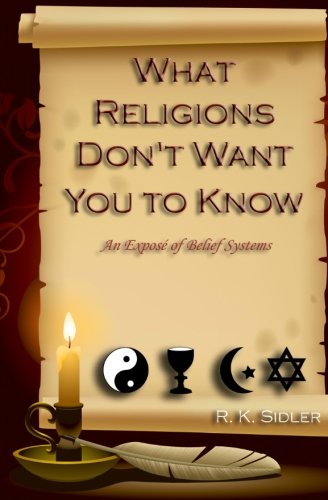 Book: What Religions Don't Want You to Know - An Expose' of Belief Systems by R. K. Sidler

about this book: What Religions Don't Want You to Know…An Expose' of Belief Systems is an expose' on how religions influence and manipulate society.

This is a unique approach which supports belief in God, and the bible, while rejecting theologies, and individuals, which profess a representative authority on God's behalf. It explains why religion is not from God, and is unnecessary. This manuscript addresses comparative teachings relating to religious, and non-religious, ideologies, significant indicators illustrative of psychological control, and direction on how individuals can become aware of such methodology enabling self-awareness.

This book is a culmination of years of research and there is currently no commercial equivalent on the market. It is targeted at people apathetic toward religion, yet who still maintain belief in God. It would also appeal to those "shopping" religions. It would also appeal to those of an investigative or conspiratorial mindset which are drawn to fictional works, in relation to religion, such as Dan Brown's "The Da Vinci Code."

• "Mr. Sidler clearly knows his subject and has extensively documented the many forms of religious organizations, from the orthodox to the avant-garde." — Gordon Osmond-Award winning playwright and English teacher