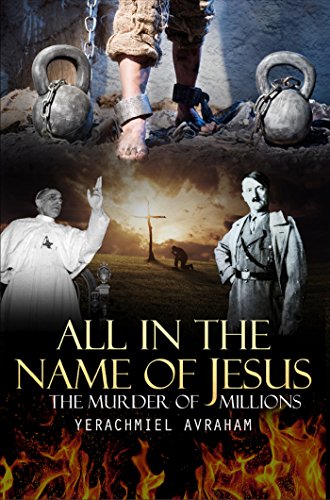 Book: All in the Name of Jesus - The Murder of Millions by Yerachmiel Ben Avraham

about this book: All in the name of Jesus, the murder of millions is not an indictment of any religion. However, the book does explain the atrocities committed by the leaders and followers of all of Christendom throughout the centuries.

This information is recorded in the halls of history all over the world. Though few recall the facts of what was committed against humanity by the people of Christendom, truth is none the less truth.

They murdered, raped, controlled, intimidated, and enslaved with a free hand. Christendom all over the world has always been interlaced with hate and racism, and it continues today.

Its book demands it, and the murder of millions of innocent people, and It began at the inception of the Church, in 325 AD.

All in the name of Jesus - the murder of millions speaks about a minuscule part of what took place throughout the history of humankind.

All in the name of Jesus - the murder of millions is a book for those who seek historical truth in the development of today's societies.

When I saw the great injustices all minorities in the world faced daily, I realized that it was the people of Christendom who supporting it.

Video: Religious Atrocities. Are We Doomed To Repeat Them?