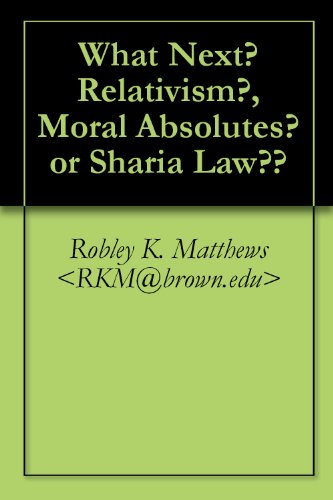 Book: What Next? Relativism? Moral Absolutes? or Sharia Law?? by Robley K. Matthews

about this book: This writing project was born late in RKM's career. He perceived the problem to be rooted in relativism versus universal moral absolutes; in secularism/atheism versus religion. The complex interaction between religions and cultures was a totally new field to him, but the approach was the same; a global perspective viewed on long time scales.

RKM favorite sport: "Golf. It's everyone against the course; against each other is secondary."

RKM favorite song: " 'Oh Come All Ye Faithful! ' at Christmas midnight Mass! If push ever comes to shove, God can count him among 'The Faithful'!"

RKM second-favorite song: 'Texas When I Die'! ! It's a ballad about a 'cowboy- turned-construction-worker' -fellow-Texan who also had the misfortune of living most of his adult life working in the Northeast! !
Refrain: "And when I die, I may not go to Heaven. I don't know if They let cowboys in.
So please, just let me go to Texas. That's the closest place to Heaven that I've been!"

About the book:
We see a western secular moral relativist culture and an Islamic fundamentalist culture to be on a collision course. Avoidance of a catastrophic collision rests with a Western return to more serious consideration of ethical and moral absolutes.
We seek to reverse the amoral trend of western society one person at a time. 'Everybody does it' is no excuse for life-altering bad choices. We ascribe the present situation to a relatively new aggressively secular, moral relativist, minority culture imbedded within an increasingly apathetic 'Judeo-Christian' society.
With a few hundred years of scientific investigation of societal problems, faith and reason shall converge. Our secular-moral-relativist brethren will learn via scientific study of trail-and-error that "Whatever works for you..." does not work on the scale of a lifetime. Moral absolutes are real. They can be discovered by science and reason. Faith gets us there sooner.

We see this general theme as worthy of consideration by several potential audiences. Perhaps first among these would be fallen-away Catholics. Behind "practicing Catholics", non-practicing Catholics are the second largest "denomination" in the U.S.! The Catholic Church invited them to walk the straight and narrow moral high ground from first communion to the day they die. For many, this didn't happen. The pagan culture ad hoc 'values' admixed with their lives. Thus caught up in the downward spiral of relativism, life has its problems. Many recognize something needs to change now. Welcome back. The Catholic Church remains the world authority on moral absolutes.

Protestants and fallen away protestants may also find this book of interest. For one thing, the senior author was one of them. His long trek from there to here may be typical. Save time; start now. To get off that slippery slope between the high ground and the low ground, moral absolutes are required.

Likewise, Muslims and Jews may find food for thought in these pages. Surely, Muslim suicide bombing is the ultimate relativistic 'bad choice'. Likewise, retaliation is a short-term relativistic choice that often collaterally takes innocent Muslim life. Long term, violence/retaliation becomes a perpetual-motion machine; likewise, an ultimate bad choice. Both cultures may gain from this book an understanding of the concept of compatibility of multiple cultures in a democratic society. ... Elsewhere, "cultural Jews" may benefit from a fresh look at the very probable existence of God and His importance in their lives.

Those into eastern religions might enjoy a new look at the concepts of God, Divine Revelation, moral absolutes, and sin from a perspective that combines science, common sense and the assumption that the mind of man is not the supreme intelligence in the universe. Two thousand years ago, Earth was a vast, culturally-fragmented planet. East was east and west was west. The experiences of the west were unknown to the east and vice versa. ... Today, we are connected.