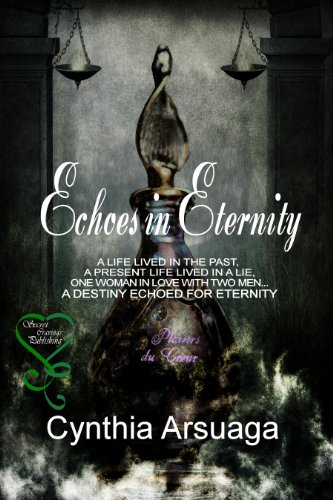 about this book: I spent two years writing this book which is like two books in one, with a story about a world from the past (Aladalia) and one today. If you're looking for something a little different, this might be the one. The title went through many transformations and eventually settled on Echoes in Eternity from the quote from the movie Gladiator: "What we do in life, echoes in eternity." ~ General Maximus Decimus Meridius from The Gladiator

It summed up exactly what the story is about, a woman who lived over 25,000 years ago and had regrets for her actions and spends many lifetimes trying to make amends which comes forward to today and is a self-discovery with confronting a secret society, two equally intriguing men, and realizing a dream.

Take a journey starting from the distant past to present day—New York and Paris, to an archaeological dig site in Egypt, and to Surrey, U.K., as Layla McKenna discovers a life lived before and accepts her destiny to live a life that will echo in eternity.