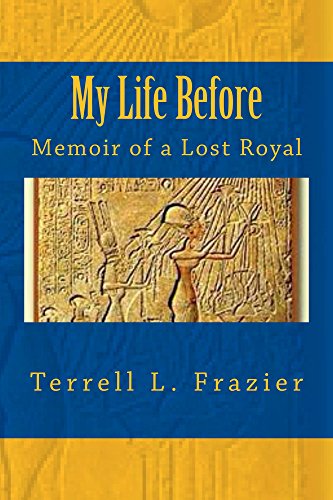 Book: My Life Before - Memoir of a Lost Royal by Terrell Leonardo Frazier

about this book: A curious tale of reincarnation and past, lives the author believes that he was a member of the late 18th dynasty of Egypt thus the younger brother of the infamous King Tut. In this life he is known as Amenhotep aka Hung Foot the second child of Queen Kiya and the heretic Pharoah Akhenaten. Terrell also believes that he was the secret lover of another infamous King, King Seti I. He shares in explicit details in what he believes to be memories of this alledged past life. He also reveals that these memories had reveal to him that he's still a defendant of that royal family.

At the age of 19, Hung Foot was sent to live with his surviving sisters Meritaten, Ankhesenpaaten,Tentenaten, Nefernefruaten-Tasherit, Neferneferure, and Setepenre by his mother Kiya to work with King Seti I. So he thought in an Instant the two began a serious love affair that ended with the birth of Seti's son Ramses and the death of Hung Foot.