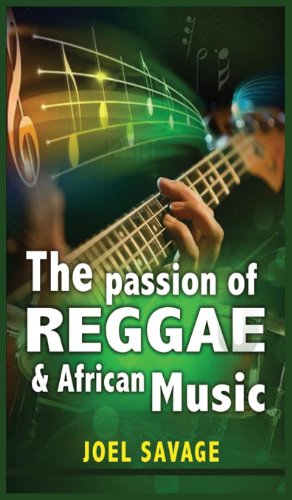 Book: The Passion of Reggae and African Music by Joel Savage

about this book: Reggae Music is not much promoted by music television stations, including MTV, yet the impact of the influence of reggae and those behind the music, Rastafarians, is enormous worldwide. Everyone knows it's because of the message the music carries it isn't much encouraged. The truth is a Rastaman wouldn't sing about luxury when he faces hunger and poverty. He would not praise the judge and the presidents when continuously the people are been denied justice.

Slavery has ruined his culture, degraded him, lost his identity and has taking him by force under sub-human conditions to another place. An unknown island now called Jamaica. Taking his psychological instruments with him Africa's music find its way to the Caribbean as Reggae and the migration of Jamaicans to England, came along with scores of people with musical experience and talents. Reggae music therefore gained followers within the Jamaican community.

It is therefore not surprise to see the influence of reggae strongly in Britain and other parts of the world where Jamaicans settled. In Britain exists scores of reggae stars including Maxi Priest, Sugar Minotte, Prince Malachi, Tipper Irie, Maxi Priest, Linton Kwesi Johnson etc, and other formidable groups like Steel Pulse, Musical Youth and Aswad. There are many reggae artists I never had the opportunity to meet but I know how their roles in the music industry change the reggae world.

Writing about the history of reggae music without mentioning the names of certain groups which added flavour and savour to reggae would be totally incomplete. I will therefore give credit to these groups, Mighty Diamonds, The Cimarron, Toots and the Maytals, The Abyssinians, Black Uhuru, Third World, The Heptones, The Skatalites, Israel Vibration, Morgan Heritage, The Gladiators, The Pioneers, The Wailing Souls, The Pioneers, The Ethiopians, Jolly Brothers, UB 40 and Inner Circle.

Within a short period after meeting the reggae stars I interviewed, painfully death has taken away four of the reggae stars I met away. Joseph Hill of Culture group, Lucky Dube, Gregory Isaacs and Alton Ellis are gone. Their space, no one can fill but the roles they played in the history of reggae shall remain indelible. My condolence to their families, relatives and fans who received the messages with shock.