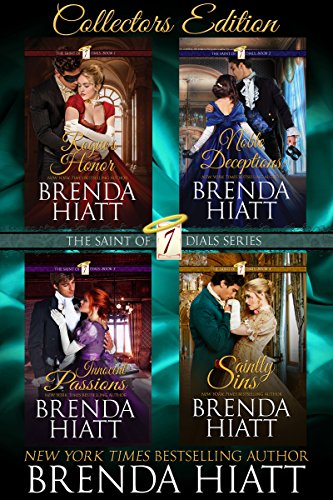 ROGUE'S HONOR A duke's daughter disguises herself as a maid to avoid a marriage that would snatch away her inheritance. She is rescued from certain social disaster by another seeming servant who is in fact the legendary Regency Robin Hood, the Saint of Seven Dials. Love is the last thing either of them needs just now, but when was love ever wise?

NOBLE DECEPTIONS An American shipping heiress and the new Saint of Seven Dials (a duke's younger son!), trapped into a marriage neither wants, find aversion turning into attraction, then passion, and perhaps even love. But each is hiding a dangerous--and illegal secret identity. Trusting each other with the truth could lead to a lifetime of happiness--or to disaster.

INNOCENT PASSIONS Former spy Noel Paxton takes on the role of the Saint of Seven Dials to hunt down a deadly traitor but finds himself distracted in his quest by studious and opinionated Rowena Riverstone, newly arrived in London. Is Rowena the innocent bluestocking she appears, or the very traitor he's been seeking? And which is in more danger-his heart or his life?

SAINTLY SINS After the last Saint retires, a penniless beauty assumes the identity of the Saint of Seven Dials to rescue her young brother from the streets. Lord Peter Northrup is both smitten and intrigued by the lovely Sarah Killian, but when he digs beneath the surface, he learns she has a secret that could ruin them both. But perhaps love is worth the risk...