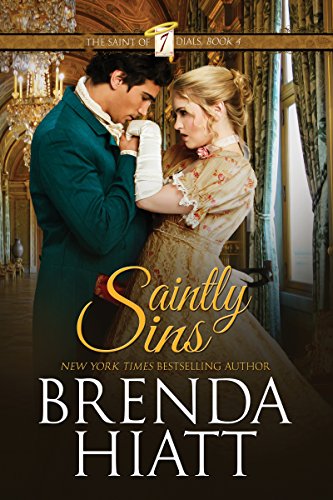 about this book: This is book 4 in The Saint of Seven Dials series from New York Times and USA Today bestselling author Brenda Hiatt.

Beautiful but penniless, Sarah Killian is forced to accept charity from her haughty London relatives in order to search for her long-lost younger brother. That search leads her to the sordid streets of Seven Dials, haunt of thieves and other criminals, where she discovers her young brother is preparing to take over the role of the legendary Saint of Seven Dials. To prevent him taking such a risk, Sarah decides to assume the Saint's mantle herself, at least until she can find gainful (and respectable) employment.

Lord Peter Northrup is more entranced by the lovely but mysterious Miss Killian than he has ever been by any other woman, but she is very careful of her secrets. When he delves beneath the surface he finds more than he'd bargained for, not only intelligence and courage, but a secret that could ruin him along with Sarah herself, should it become public. But perhaps love is worth the risk...

Saintly Sins was originally published as Wickedly Yours by Avon Books in 2003. I had planned to write a fifth book for the "Saints" series (Harry Thatcher's story), but the idea was unfortunately vetoed by my editor at the time. Now, however, I may write it after all, if enough readers want to read it. Let me know!