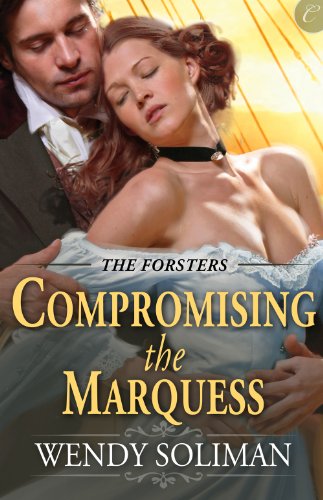 Book: Compromising the Marquess (The Forsters) by Wendy Soliman

about this book: The first in a series of Regencies following the fortunes of the Forster dynasty. Hal Forster, Marquess of Denby, is responsible for his family's fortunes, and the welfare of his three siblings. If that weren't enough, he's also engaged on vital business for the government following the conclusion of the Napoleonic wars.

When Leah Elliott moves to Denby with her sister Beth, she worries that she won't be able to keep her head above water. As a writer of gossip for a London scandal sheet, there isn't likely to be much going on in the country to interest her readers. Then she meets Hal and is convinced there's more to him than meets the eye. When Leah spreads rumours that he's about to become engaged, thereby practically forcing Hal into an unsuitable alliance, the least Leah can do is offer to pose as his paramour. How hard could that be? Besides, it will give her the chance to find out what he's really up to, won't it...