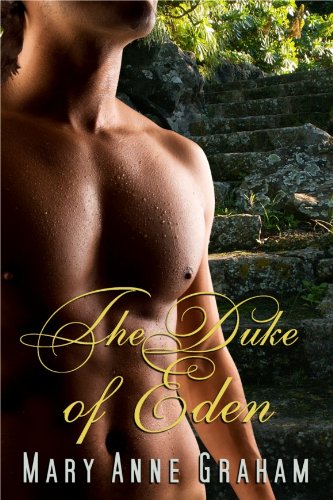 Book: The Duke Of Eden by Mary Anne Graham

about this book: This is a historical romance that explores what happens when E.S.P. is right and skepticism is wrong. Too often, we believe that anything or anyone who is "different" should be avoided. Why shouldn't the reverse be true? Why shouldn't we flock to those with different gifts or different outlooks? Perhaps we should!

In "The Duke of Eden" as a boy Brand Ellsworth gained a dukedom rather than the Viscountcy he would have inherited by agreeing to a betrothal to Adria North, the daughter of the Duke of Warren. At the time, it seemed a small price to pay, but when the boy became a man he couldn't tolerate the notion of wedding the strange little girl who had allegedly inherited her family's famous ability to sense the future. Adria believed what her father had believed - that she and Brand were fated soul mates. Brand? He believed it was all a lot of hooey.

Brand deliberately stepped into a marital trap because he knew that honor would demand he marry the woman. Then he summoned the girl who'd grown into a woman he'd avoided for years to London, to break their betrothal. Brand hadn't realized that the dukedom went with Adria's hand but all the bachelors in London went wild at the prize that wedding the beautiful lady would bring. And the last thing Brand expected was that Adria North would grow up to be exactly what she and her father had predicted.

Yes, Adria was his Eden without the apple, but Brand had picked the apple. Would he have to watch his fated soul mate walk down the aisle with another man?