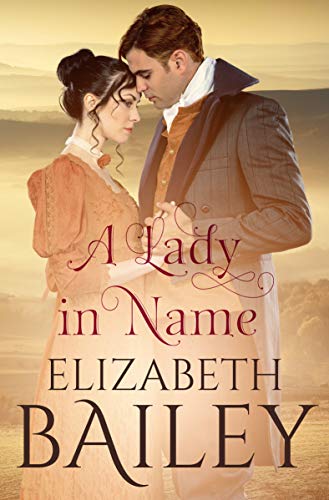 Book: A Lady in Name - A Georgian Romance by Elizabeth Bailey

about this book: I was watching TV and saw a program about unmarried mothers in Ireland in the fifties and what it meant for them when they were sent to a sort of school to have the babies. It triggered the idea for a story about a love child in the 18century, when the situation would have been a great deal more difficult for any girl caught out in pregnancy. A Lady in Name grew from this beginning.

Of course, my Regencies are about the upper classes of the time, so it was imperative for Lucy to have been fathered by an aristocrat. She doesn't know, growing up believing her "Papa" was the vicar who raised her. Only on his unexpected deathbed does he reveal the truth, leaving Lucy in a terrible dilemma about her future.

Distraught, once the funeral and attendant problems have been sorted through, Lucy goes to confront her real father and finds instead that the man is dead and his nephew Stefan has become the earl in his place. The resulting maelstrom and confusion is fuelled by the growing attraction between Lucy and Stefan, which is naturally impossible. An earl cannot marry a girl without a name.