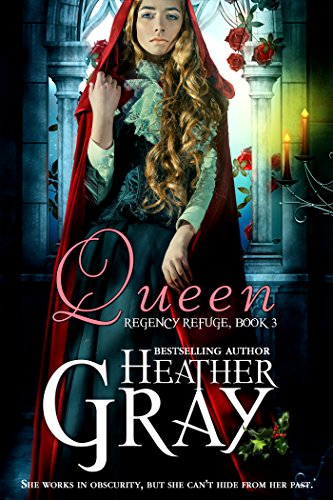 about this book: Queen is Book 3 in the Regency Refuge series. Though it can be read as a standalone, some of the characters from Jackal (Book 2) do make an appearance, so you might be better off reading that book first.

Queen is about a woman whose world was torn asunder when she was twelve. An evil man took her family from her, almost took her life, and eventually robbed her of her country. The book starts twelve years after those events. She's no longer a child, and she's learned a few things along the way.

Owen is a government spy who spends more time assigned to ledgers than to people, and he's come to resent that fact. He believes his boss is holding him back. In studying one of those ledgers, though, he discovers a discrepancy and decides to pursue it. Little did he know it would land him in the middle of an international bribery scheme or that he'd find himself working side-by-side with the legendary spy called Queen.

This is a story about tragedy, insecurity, and mistrust. It's also a story about forgiveness, faith, and courage. Come travel with Queen and Owen as their journey takes them through the English countryside and into the darkest alleys of London. What will they uncover about the plot they're investigating? And what will they discover about themselves?