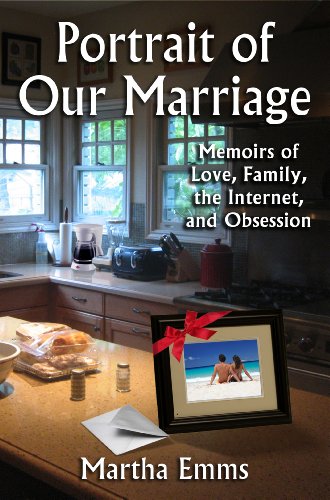 Book: Portrait of Our Marriage by Martha Emms

about this book: A woman, a romance, a love, a marriage, great sex, and family, all sounds like your typical romance novel right? Portrait of Our Marriage is anything but typical. It has humor, love, conflict, and all the above. This book is written as a real life romance and does not follow any pre-scripted formats for a book. Matter a fact the book is so real it touches on a subject that may not have been broached so openly before. I believe it will both touch you heart and shock you, while taking you behind closed doors into a private world some couples hide.

Although, Portrait of Our Marriage takes on the subject of porn addiction, it is not literary pornography but it does have sexual content. It is a story, a journey of one woman's life as her husbands once casual interest in pornography becomes an obsession. Weaving a story throughout events in their life we see how his fascination becomes an obsession and how it is affecting and changing them each personally and as a couple. The story unfolds and captivates as you are seduced by the romance, and drawn into the characters and their story,
The idea for my book came to me a long time ago after watching an episode of The Oprah Show. It was an episode where Oprah was interviewing a man who was addicted to porn. Later that night I had a dream and it was so real it was like watching a movie. Then I continued to have different dreams, a story unfolded as if it was seen through the eyes of a woman looking back over her life while looking at pictures on a picture display device. Originally, I began by writing the story as a screenplay. I worked on it for a while and then put it away, later I switched to making it a book. I had the information from my dreams but I needed more to make the story as real as possible.

We all know today that there's an invasion of fast and easy access to pornography, as well as other outside influences being brought into our homes through today's technology. As these influences increase, our knowledge and awareness of threats and other possibilities must also grow. The book isn't a story about right or wrong, but it is about life.

I believe in my story, and although it is not a traditional romance it is an important one. I hope adults will read it, and spread the word. Then, let's get the conversation started.