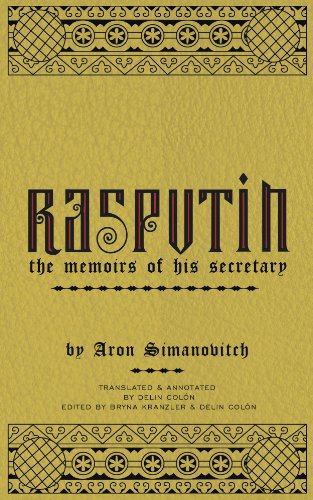 Book: RASPUTIN - The Memoirs of his Secretary by Aron Simanovitch and Delin Colon (Editor, Translator)

about this book: The memoirs of Rasputin's secretary, Aron Simanovitch, are translated into English for the first time, as well as annotated, by Delin Colón, his great-great niece.

Simanovitch lends an up-close, personal view of Rasputin, as well as depicting the Peyton Place that Petersburg was, with its gossip, plots and intrigues. Even the gossip is historically valuable as a window into the general perceptions of Russian social classes, which gives insight to their attitudes and behaviors.

Simanovitch also reveals Rasputin's progressive ideas for social and economic reform that outraged the nobility, prompting them to discredit and,eventually, do away with the peasant. His revelations about Rasputin's humanitarian acts lend a fresh, three-dimensional view to this controversial figure, debunking many myths in the process.

Simanovitch's memoirs were originally published in Russian (1928), then translated into French (1930), and subsequently into Spanish, Hebrew and German. The German edition (mid 1940's) was rewritten by the Nazis during WW II to make Rasputin appear to be a pawn in the hoax they called 'the Jewish conspiracy for world domination.'