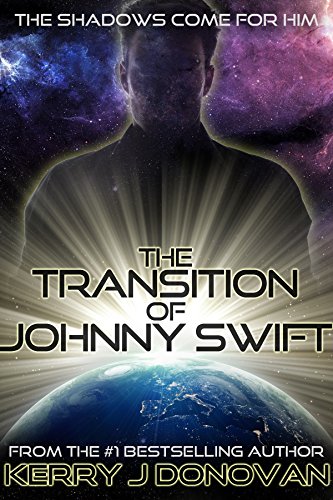 Book: The Transition of Johnny Swift - by Kerry J Donovan

about this book: The Transition of Johnny Swift is the latest book from prize-winning author, Kerry J Donovan, who has taken a break from writing his DCI Jones Casebook crime thrillers to present a paranormal/psychological thriller.

Frank Brazier is a racing driver, and a damned good one. He's one win away from taking the Formula 2500 Championship and with it a ticket to the big time—Formula 1. He has a wonderful life, a loving adoptive family, and a new girlfriend, Jenny, who could just be 'the one', but ...

Frank sees strange things; a ghost, or a spectre, or, damn it ... he doesn't know that what the thing is, but he calls it Shadow-man. It doesn't speak, but it's there at times of stress, hovering, beckoning, taunting.

Frank fears the onset of madness or maybe a brain tumour. He knows he should see a doctor, but that would end his chances of a place in the Big League. When Frank's tyre explodes half way through the final race and Shadow-man smiles, it's only the start of Frank's terror.

The story sets a number of questions:

• Who is Shadow-man and what does he want?
• Who is Johnny Swift and from what did he transition?
• Can Frank save his sister's life when he's stuck in a hospital bed with a broken hip and a headache that would paralyse lesser men?

Kerry J Donovan writes clear precise prose with a style of his own and you won't work out the answers, you really won't. This is a fascinating read.

Anyone who likes fast-paced fiction that crosses genre divides will love this book.