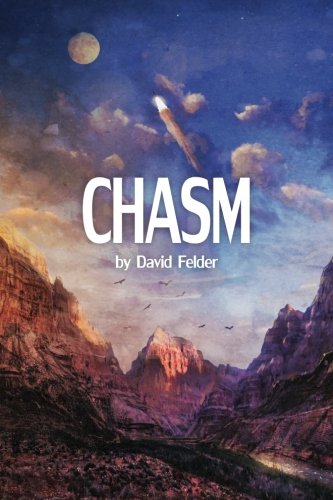 about this book: CHASM is a thriller about a rocket engineer, Jerry Franklin, who is called in to work on a Sunday evening, to the chagrin of his wife and young son.

While working at a launch site, his is attacked by a maniacal sociopath, Michael Potter. They fight and Jerry Jerry gets caught inside the unmanned supply ship as it is launched into space.

Stealing Jerry's car, Potter finds a photograph of Jerry's wife Sheryl and becomes obsessed with her. He begins to stalk her as Jerry struggles to get back to Earth.

Potter follows Sheryl and her son to the Grand Canyon where he plans to kill the boy and possess the mother.

I began working on this book during a trip to the Grand Canyon in 2001. Originally, I thought it would be a screenplay, but I wanted to add more character development and found that a book would fill my goal better. The story grew on its own as I wrote and found myself exploring thoughts about survival, science, faith, family and G-d.

My first draft was 160,000 words, way too long for a novel and I spent a good three years fighting with the manuscript, trying to reduce the length and find the real "meat" of the story. After I finally had the story down to its current length, I spent another year proofreading and editing.

I'm a fan of sci-fi thrillers; Michael Crichton is one of my favorite authors. I like the way he takes existing science technology and extrapolates it a few years into the future, creating fiction that is so believeable because of the current science it's based on. For example, in Jurassic Park, the entire process of genetic engineering to create living dinosaurs seems so real because Crichton so skillfully mixes the science into his story.

I've tried to use the same logical extrapolation to make my story plausible.

Video: This video is from the Payload Systems launch pad 48C